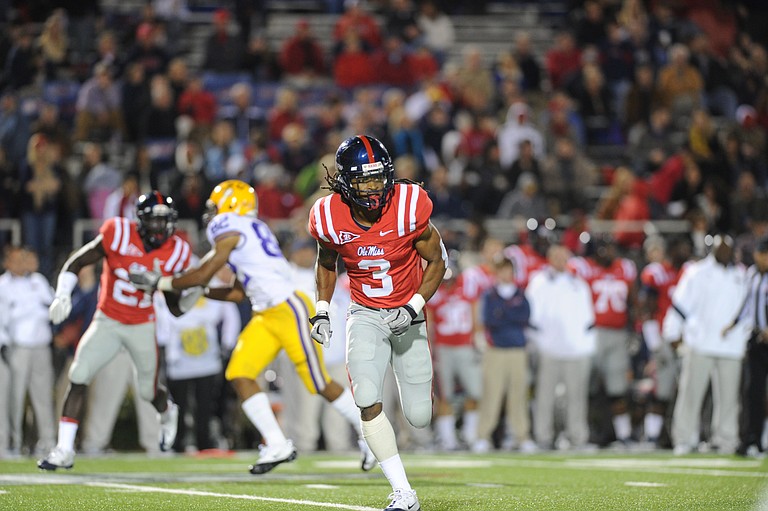 Mississippi State (6-0) led the way with a 41-31 victory over Tennessee to stay undefeated. The Bulldogs jumped out to a 27-14 halftime lead before the Volunteers fought back into the game in the third quarter.

Quarterback Tyler Russell had one of the best games of his collegiate career in the win. Russell completed 23 of 37 passes for 291 yards with a touchdown.

The play of the night for the Bulldogs might have come on their final touchdown. Malcolm Johnson made a remarkable catch and tapped his toes in the back of the end zone on his 9-yard catch.

After that, Ole Miss outscored Auburn 27-3 for the rest of the game. The Rebels doubled up the Tigers in total yards at 451 to 213 as they moved above .500 again.

This weekend was huge for the state's three SWAC teams. Not only did all three get wins, but all three got right into the thick of the East division race.

Jackson State (3-4), down 20-13 at halftime, rallied twice in the second half against Alabama State. Ryan Deising gave the Tigers the win as time expired on his 39-yard field goal.

Alcorn State (3-4) might have pulled off the shocker of the day with their victory over previously undefeated Alabama A&M. The Braves raced out to a 21-14 lead in the third quarter and then held off a late rally by the Bulldogs for the win.

In a total-team win, ASU got a 66-yard interception return for a touchdown by Devon Francois to put the Braves up 14-10 halftime lead. Alcorn State forced three turnovers and had none of their own.

Mississippi Valley (2-4) State took winless Grambling State behind the woodshed in their 45-21 victory. The Delta Devils jumped out to a 17-0 halftime lead and never looked back against the Tigers.

Delta State (3-3) got their first home win of the season. The Statesmen rallied for 20 points in the fourth quarter to beat West Georgia 33-24.

Millsaps (5-1) got right back to winning after suffering their first loss of the season. The Majors rolled Sewanee 42-28 for their fifth victory of the season.

Belhaven (3-4) had no trouble with Bluefield College (Va.) at home. The Blazers laid the smack down in their 66-10 win against the overmatched Rams.

Southern Miss (0-6) played Central Florida all the way to overtime, but the Golden Eagles still weren't able to get their first win of the season.

USM kicker Corey Acosta made a 37-yard field goal to send the game into overtime. The Golden Eagles defense was unable to stop the Knights offense from scoring on both their possessions in overtime. USM freshman quarterback Anthony Alford ran for a touchdown in the first overtime, but threw an interception to give UCF the 38-31 win over USM in the second overtime.