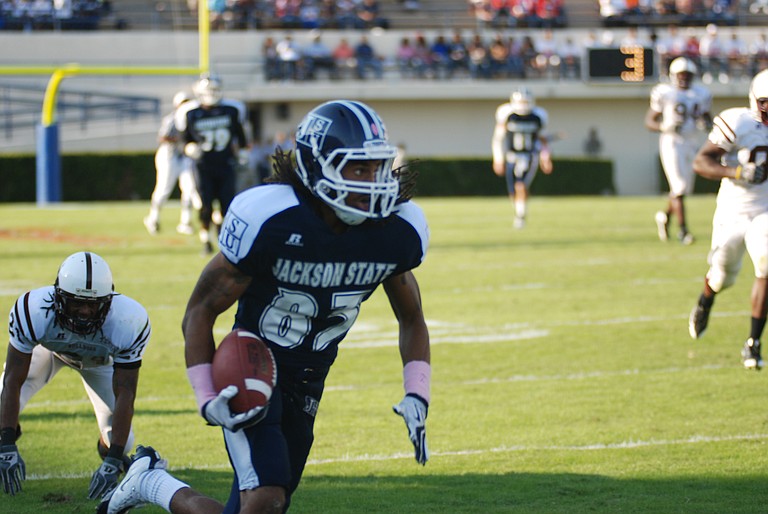 Sports are normally a bottom-line business, and that bottom line is: Did you win or did you lose? But sometimes, even in defeat, recognition should be given to a special accomplishment.

Jackson State went down 34-24 to Arkansas-Pine Bluff University last Saturday, but the Tigers still had three players rush for more than 100 yards in the loss.

The Tigers started slowly as Arkansas-Pine Bluff jumped out to a 21-7 halftime lead.

Tommy Gooden led JSU as he ran 24 times for 104 yards and a touchdown. Gooden had the lone Tigers score in the first half, when he scored on a seven-yard run in the second quarter.

Jackson State's other runner, Rakeem Sims, added 100 yards and a touchdown on 17 carries. Sims got JSU back in the game in the third quarter to cut the APBU lead to 21-14.

The Jackson State defense never seemed to come up with a stop when the Tigers needed it most, as they allowed another field goal by APBU early in the fourth quarter to pad its lead to 27-17. However, there was still life left in the Tigers with plenty of time left in the game.

JSU quarterback Clayton Moore scored on a one-yard touchdown run with over half the final quarter left to play to make it a 27-24 game. Moore was the third Tiger to rush for more than 100 yards as he went for 100 yards on 13 rushes.

Arkansas-Pine Bluff put the game away with its final touchdown and only 1:39 left on the clock. The JSU rally came up short when the offense and defense couldn't make enough plays late in the game.

Jackson State will wonder what might have been if it hadn't turned the ball over four times. The Tigers had seven fumbles over all.

Dedric McDonald fumbled at the APBU 10-yard line in the first quarter to kill a potential scoring drive. In the second quarter, Gooden fumbled at the JSU 22-yard line, leading to a touchdown for APBU.

Gooden put the ball on the ground again early in the fourth quarter, leading to a field goal by the Golden Lions. The second fumble by Gooden happened at the JSU 10-yard line.

The Tigers' final fumble came when Moore was sacked and stripped at the JSU 32-yard line with less than two minutes left to play.

On the season, Gooden leads JSU in rushing with 329 yards on 61 attempts. Moore follows Gooden with 269 yards on 49 rushes, and Sims is third on the team with 188 yards on 38 carries.