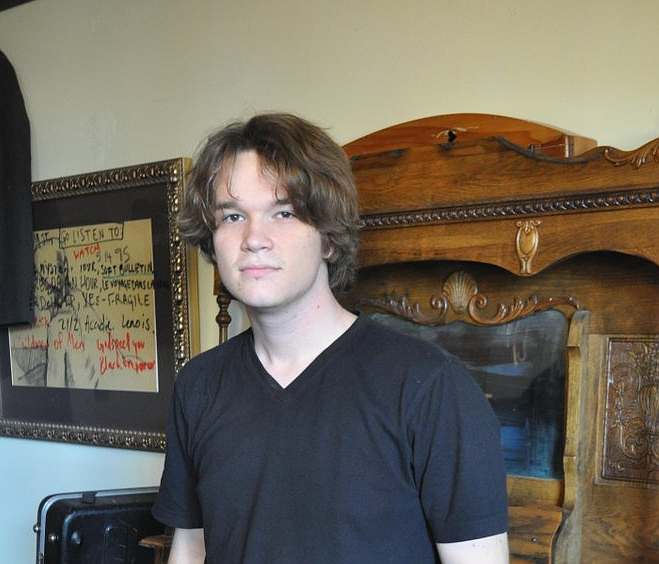 If you go to Sneaky Beans today, you will probably find a tall, shaggy-haired young man sitting in a corner drinking a steaming hot mug of medium coffee. A large stack of composition books, or "the bricks" as he calls them, will be carefully placed on the table with his guitar leaning against the wall behind him. His name is Skyler Bready.

At 22 years old, this Belhaven University senior, who is majoring in composition, calls his passion for music an addiction. "It all started when I was 10 years old," Bready says. "My dad's guitar was sitting around the house, and I told him that it was time for him to teach me how to play it."

His dad taught him three chords, and Bready has been playing every day since. Now, he plays seven instruments--the electric guitar, acoustic guitar, bass, banjo, mandolin, piano and drums. He also teaches others how to play those same instruments at Fondren Guitars and composes his own music.

Music runs deep in this Jackson native's family roots. His dad, John, played in a rock band, traveling loops around the country for years, and his mother, Shellie's, side of the family has a rich stylistic tradition of singing thick, harmonic southern gospel.

The talented musician has always had a knack for writing his own pieces. He compares it to playing with Legos. "When you get Legos, you get a big box of them, and you all have all these shapes to work with," Bready says. "That's how composing music works, too; you just put the pieces together."

When he graduates from college, Bready says, "I am going to be writing like a madman." Bready already practices a daily composition pattern, typically writing at least one piece of music each day, but he wants to increase his output and quality, and he hopes to get published as quickly as possible. He also sees performance as a tool of improvement, where he is able to "sit back and view people's reactions while (my set) is going on, and especially having conversations afterward."

Hearing Bready talk about his involvement in his current band, Poly Cannon, you can get the sense of how much music means to him, "I enjoy playing music from the standpoint that this is creating an experience that is authentically fun," Bready says. "It addresses the human spirit in a way that a lot of things don't." Bready calls Poly Cannon's sound classically-minded, experimental rock.

Bready's life is about to change in a big way, when in January he marries his best friend, Erin Hoover, a ballerina from Indiana.

No matter what the future holds, Jackson will always be a part of this talented musician. "I realize to what extent I am a part of Jackson; it is not just some playground I am running around on; it is an integral part of myself," Bready says.