Musician of the Day: Annie Chadwick and the NYCity Slickers 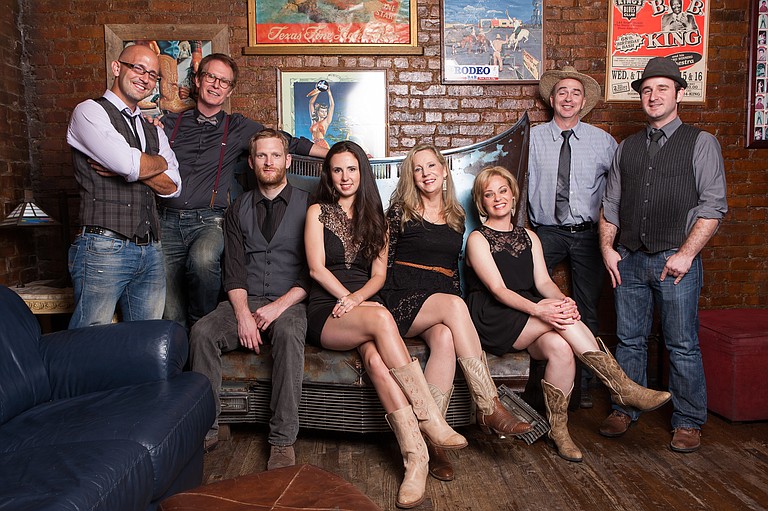 Annie Chadwick (center female), along with her progressive bluegrass band the NYCity Slickers, is coming home to Mississippi for an eight-stop tour. Courtesy Annie Chadwick

Mississippi girl Annie Chadwick has gone far and done great things, and now she's back for a spell. Born and bred in Jackson, Chadwick of the contemporary bluegrass band, the NYCity Slickers, began her singing career as a child in the choir at Capitol Street Methodist Church.

While attending Provine High School, she also sang in several school theatrical productions. Her first professional performance was with an all-girl group she and her neighbors started called the Petti Coat Minstrels in which she sang and played the washtub base. After high school, she attended Millsaps College where she met her husband and NYCity Slickers co-founder, Faser Hardin. In the 1980s Chadwick and Hardin moved to New York City, where they have lived for 25 years. Their daughter, Abigail, was born there.

When Chadwick moved to New York, she began to act professionally. She played John Lithgow's wife in the feature film "Confessions of a Shopaholic." She also appeared in an episode of "Law and Order: Special Victims Unit," and on soap operas "Guiding Light" and "Another World." When David Spade was the host for "Saturday Night Live," during a sketch she played his sister. She has also performed in several New York theaters.

"If you like to act or are creative in that way, that is something you have to do," she says. Chadwick's desire to act came from watching The Little Rascals. "I remember watching The Little Rascals and seeing Darla and thinking that's what I want to do," Chadwick says. "All of us in the neighborhood, we were inspired and we would go out to the garage and put on shows."

"We are different from other bluegrass bands in that bluegrass bands are male driven vocally," Chadwick says. Unlike more traditional groups, a trio of women vocalists, including Chadwick, fronts the NYCity Slickers. A five-piece, all-male band backs up the singers tight, soaring harmonies. Chadwick's brother Vernon (aka Varner Stomps) and brother-in-law, Reeves Jones, write songs for the band, helping them stay grounded in their Mississippi roots and heritage. The songwriters, who still reside in Oxford and Canton, send their completed lyrics to the band in New York.

At the picnic, Chadwick and band announced their upcoming "Mississippi Home" tour scheduled for Oct. 6-14. To date, the tour includes performances in eight locations. The band will kick-off the tour in Jackson at Hal & Mal's (200 S. Commerce St., 601-948-0888) on Saturday, Oct. 6. One of two gospel performances will follow on Sunday, Oct. 8, at the First United Methodist Church of Canton (3301 S. Liberty St., Canton, 601-859-4621). The band will round out their time in Jackson on Oct. 9, performing in The Arts and Lecture Series at Millsaps College (1701 N. State St., 601-974-1000). Other stops on the tour include the Southern Cultural Heritage Center in Vicksburg and Ground Zero Blues Club in Clarksdale.

For complete listings and ticket information, go to nycityslickers.com/tour.php.