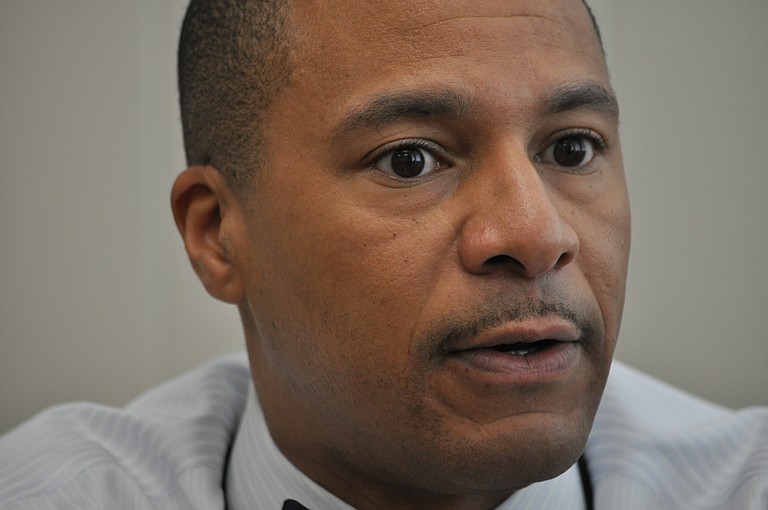 Superintendent Cedrick Gray is making waves early at JPS by taking the city to court over the Jackson City Council’s refusal to increase property taxes to meet the school district’s proposed budget. Photo by Trip Burns.

Jackson Public Schools is taking the city to court over the City Council's refusal to approve a millage rate to support the school district's approved budget.

The Council voted Sept. 14 to approve the school district's original budget of $86 million and the 2.5-mill increase in property taxes it requires. It did not approve the $88.6 million budget that JPS first requested in August and that would require another 2 to 2.5 mill increase.

The Council rejected JPS' latest budget because city attorneys said the school district failed to give proper public notice of the budget. JPS advertised the $86 million budget, including the possibility of a millage increase, but failed to publicly advertise the $88.6 million budget, City Attorney Pieter Teeuwissen said.

JPS attorney Dorian Turner said the district filed a bill of exceptions on Sept. 24, which she said is any citizen or agency's route to appealing a city council decision they believe to be unlawful. She said it is her opinion that the district's notice of the $86 million budget is all the law requires. Further, state law also requires that the city set the millage rate to meet the budget that the JPS board approves.

"In regards to the millage, we do not believe the rate the Council approved Sept. 14 is sufficient to cover the JPS budget," Turner told the Jackson Free Press.

Turner filed the case in Hinds County Circuit Court on behalf of JPS. The case will come down to interpretation of the law, Turner admitted. The question is whether the judge believes the district's original advertisement of the $86 million budget was sufficient notice. When this reporter asked if the JPS board amending the budget after the notice makes the original advertisement null and void, she responded like an attorney whose entire case rides on that one question.

"That's a question for the judge," Turner said.

Mayor Harvey Johnson Jr. had little to say about the legal issue after the city council work session at City Hall Monday. He said he didn't know much about it and that he cannot comment on ongoing legal affairs, but that he knew the process is just getting started.

Johnson and several council members expressed frustration that JPS did not send a representative to the meeting Sept. 14 to answer their questions. Sherwin Johnson, JPS communications specialist, told the Jackson Free Press after the meeting that Gray was out of town and unable to attend.

The approved JPS budget includes an operational budget of $69 million, a decrease from last year's $72.5 million. The additional money will go toward paying off a pair of bond issues JPS received in 2006 and 2008 worth $150 million. The school district owes $2.3 million on those bonds in the upcoming year.

During the Aug. 20 presentation to the city council, JPS board president Sharolyn Miller said the district needed the increase to hire replacements for some of the 100 teachers who have left, to buy new textbooks and to make school-bus improvements.

JPS warned of legal actions to come almost immediately after the council's Sept. 14 decision in a press release.