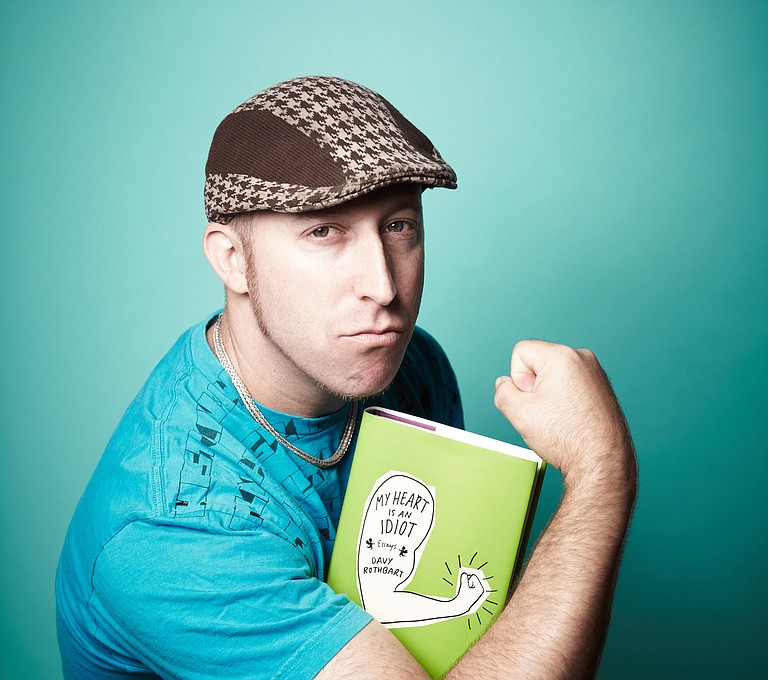 Davy Rothbart puts his heart out on his sleeve in his latest book of stories. Dan Busta

When Davy Rothbart applied for a job at National Public Radio’s “This American Life” radio program, he was honest about his previous job experience: pizza delivery guy, ticket scalper, marijuana salesman. Ira Glass called him in for an interview anyway.

“I had no business getting the job because it was a job as a producer there. I had never had a job in radio before. I had never actually had a real job before,” Rothbart says.

Rothbart didn’t get the job, but Glass was interested in some of the ideas he presented, and Rothbart began doing stories for the radio program. It’s indicative of the life the 37-year-old Michigan native seems to have led—random events leading to unforgettable stories, as a result of Rothbart’s persistent tendency to just pursue and see what happens.

That tendency is on display in his latest book, “My Heart is an Idiot,” a collection of stories. “Some are funnier, some are more serious, many are about love and relationships—my own misadventures in that arena—but a lot of them, too, are about interesting strangers and people I’ve met on the road over the last 10 years and the ways that meeting them changed my life in interesting ways,” Rothbart says.

With hints of David Sedaris, Chuck Klosterman and Chelsea Handler, Rothbart’s prose is at various times acerbic, rueful, gentle and poignant. He slips easily between crude and scandalous encounters (this book is not for children) and touching moments. Despite the fact that most of the loves mentioned in the book are finished or failed relationships, Rothbart doesn’t look back with bitterness, but with a sense that each person that came in or left his life made it more interesting along the way.

Rothbart is best known for Found, a magazine he has produced for a decade, which collects and publishes “finds”—bits, notes and scraps of paper that people all over the world find and send in. The annual magazine has spun off into three books, a website and several tours, all of which he calls a “giant community art project.”

The first find, Rothbart says, was left mistakenly on his car one day. “It was this note on the windshield of my car, and it was addressed to Mario. And I read the thing, it says, ‘Mario, I f*ing hate you. You said you had to work. Why is your car here at her place? You’re a liar, I hate you, I hate you. Signed, Amber. P.S. Page me later?’” he says. “So it was funny because she was so angry and upset with him, but that whole form of love, you know, ‘page me later.’ But, of course, it wasn’t even Mario’s car, it was my car.”

After showing the note to several friends who in return showed him bits they had saved, Rothbart realized others shared his fascination with little scraps of paper and lost life. He and a cousin threw together the first magazine and went to Kinkos to print 50 copies.

“The dude working there, he was like, ‘Man this is awesome, let’s make 800 copies.’” Rothbart says. So they did. Rothbart and his friends held a release party for 100 people—each bought a copy for $5. Unfortunately, that left Rothbart with 700 copies filling his apartment in boxes.

His roommate wasn’t exactly pleased, especially since Rothbart was leaving for a trip. When he returned a few weeks later, all the boxes were gone. “I figured he either threw them out or put them in the basement storage area,” he says. But his roommate told him they were gone because so many people came by to buy copies. “The neighbors had called the police; they thought he was selling drugs out of the apartment. Day and night, people would be knocking or ringing the doorbell,” Rothbart says.

In addition to touring for “My Heart is an Idiot” and running Found magazine, Rothbart keeps busy by writing for the popular sports and pop-culture website Grantland and doing occasional stories for “This American Life.” He also works one night every year at Bell’s Pizza in Ann Arbor, Mich., where he got his first job.

“New Year’s Eve is their busiest night of the year,” he says. “They always need extra help and, you know, people never know what to do for New Year’s, so I always like having my plan already intact, so I work for Bell’s. It’s kind of fun, you get to duck your head into like 40 different parties. ... It’s kind of like a nostalgic night, I drive around the city, and I know all the streets like the back of my hand in Ann Arbor, and I just deliver pizzas.”

It sounds like the start to one of Rothbart’s stories: an innocuous adventure filled with promise.

Lightning round with Rothbart:

Who or what gave you the best kiss you’ve ever received?

I’m going to say my 97-year-old grandmother. I just got to hang out with her in Philly a couple weeks ago. Just that she’s still alive and kicking and awesome. She gave me a kiss on the cheek.

What is your biggest pet peeve?

What is your ideal present?

If you could strike one thing off your past, would you? And if so, what?

This is stupid, but I took a fall off a ladder about five years ago, and I shattered my ankle, and I’ve never fully recovered. So I’d take that one boneheaded move off my list.