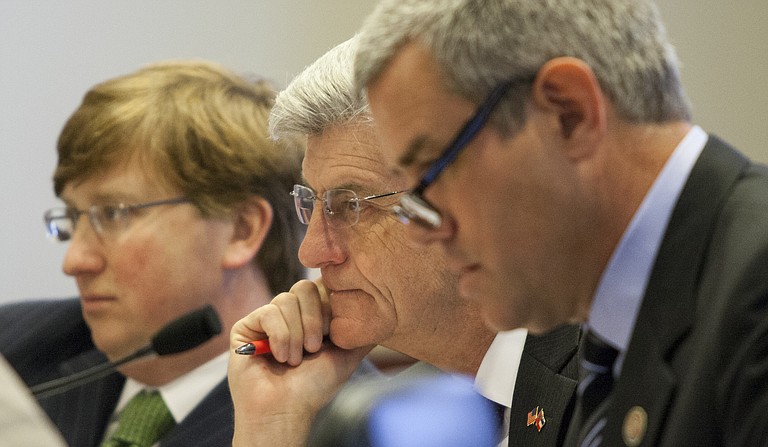 Federal budget cuts would be a huge hit to Mississippi's gross domestic product, state economist Darrin Webb told Gov. Phil Bryant and the Legislative Budget Committee at a meeting Monday. "We get about a third of our GDP from the federal expenditures," Webb said. "So that would be a big cut to us."   In a state that is arguably the most reliant on federal funds, the Washington debate over the fiscal cliff hits home, Webb explained--especially with the possibility of shrinking revenue cuts to federal programs and/or a continuation of Bush-era tax cuts, which will expire Jan. 1, 2013, if Congress doesn't act to preserve them. .  The good news, Webb said, is that the state can expect $118.3 million more in fiscal year 2013 than it originally estimated. He said the state is at mid-1990s-level employment, and job growth has been slow.  The federal uncertainty could keep the economy from returning to pre-recession levels of growth, but recovery in the housing sector and recent booms in the automobile industry will help prevent another recession, Webb said. The growth will likely pick up steam and turn into a 1.6-percent increase from fiscal-year 2013 to 2014 to $5.18 billion in state revenues.

Webb said he believes the state will bring in about $118.3 million more in revenues during fiscal year 2013 than he originally estimated.

Under Webb's advice, the state raised its revenue estimation for fiscal year 2013 to $4.94 billion. That is a 1.4-percent increase from the 2012 income. The general fund will need to grow about 1 percent over the rest of the year to cover the estimate, Webb said.

"We believe that's doable, given the current outlook for the economy," he said.  Bad Outlook for Education, MAEP

After the meeting, Bryant made it clear that one area won't receive additional funding: education. Bryant said the state will likely keep the funding for most state agencies and departments steady in 2013, but will make slight cuts to some programs; however, the only program he mentioned by name that will not receive full funding is the Mississippi Adequate Education Program.

MAEP formulates and levels the needs of the state's public-school districts, then requests that the state match its estimate. Last year, the state provided $260 million less than what MAEP requested. The state has fully funded MAEP only twice since the state Legislature passed it into law in 1997.

Bryant made it clear what he isn't willing to underfund, though.

"I think what we can't do is cut back on public safety," Bryant said. "We can't cut back on MEMA and our Department of Public Safety. I don't think we can cut back on our job creators."