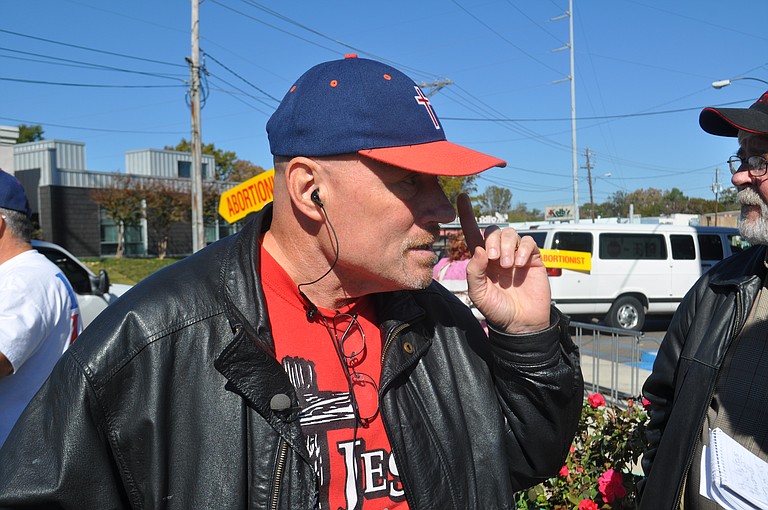 The Rev. Rusty Lee Thomas of Waco, Texas, is one of about 30 abortion protesters spending the week in Jackson. Photo by Trip Burns.

"Sir, did you know they are killing babies right there?" asked a young blond woman as a Jackson Free Press reporter approached the Jackson Women's Health Organization in Fondren.

Anti-abortion activists from six states are occupying each of the four corners at State Street and Fondren Place as part of a nationwide campaign known as States of Refuge.

Dueling sound systems--an anti-abortion protester preaching from the Bible and a clinic security guard blaring police siren noises--annoyed local business owners and resulted in a visit from two Jackson police officers who stood by to keep the peace.

The Mississippi campaign is especially important for the anti-abortion movement, said organizer Chet Gallagher of Nevada.

"This one has the opportunity to close before the 40th anniversary of Roe v. Wade," said Gallagher, who wore a black leather jacket and black baseball cap with the word "Jesus" in red lettering.

Earlier this year, Mississippi lawmakers passed a law requiring doctors at abortion clinics to be certified OB/GYNs and have admitting privileges at a local hospital. The new law is an additional regulatory layer that could shutter JWHO, the only abortion clinic in the state, whose doctors come from outside Mississippi to perform abortions.

A federal judge put full implementation of the law on hold to give the clinic time to comply, but if none of the hospitals where JWHO applied for admitting privileges accepts the clinic's application, Mississippi could become the only state where women would not have access to abortion, a right guaranteed by a 1973 U.S. Supreme Court decision.

The Rev. Rusty Lee Thomas believes the Declaration of Independence, which guarantees Americans the "right to life, liberty and the pursuit of happiness," supersedes the court's ruling because the word life appears first.

"Without life there is no liberty," said Thomas, a native of Waco, Texas.

The States of Refuge campaign, which is part of the anti-abortion network Operation Rescue/Operation Save America, began the day after Election Day, Nov. 7, and continues through Sunday, Nov. 11.

Um, the Declaration of Independence is not even a law, so it can't "supersede" a court ruling. But thanks for playing, Rev. Thomas.

That's just ignorant. Some people will believe and spread anything--without bothering to check it out. Sad.

Go back to Waco.

aww guys there are easier ways to get ladies to pay attention to you than to be obsessed with our lady parts its just damn creepy.

Reports this morning that they are outside Jackson Prep. They strike me as the "God Hates Fags" equivalent: going for shock value. And they must be desperate since the election Tuesday so they'll do anything for attention. I'm not sure how targeting kids outside schools will help their cause, however. Seems dumb.