I Don't Want To Grow Up 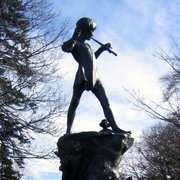 Peter Pan Syndrome is named for a fictional boy who would never grow up and lived in Neverland.

Disclaimer: This article is not intended to provide medical advice, diagnosis or treatment.

I was shooting ball at the gym a couple weeks ago with Joe, an old classmate. When he started complaining of minor chest pains and shortness of breath, I suggested that we go to the emergency room. He refused, saying it was no big deal. We took a break, though, and began to talk. We reminisced about our high school days—everything from the football field to the girls.

I remembered shooting ball on summer Saturdays from 10 in the morning until 8 at night. Back then, we ate junk and drank sodas all day, then went to the local hamburger joint to eat burgers and fries. We would stay out late, often breaking curfew, to hang out together, and then repeat it all the next day. We ate whatever we wanted and had unlimited energy.

Then we started to talk about the reality of our lives today. Both of us have many responsibilities. I was tired after two hours of shooting ball. Joe laughed and told me his back and legs hurt. We agreed: Time changes everything.

Joe told me his company encouraged employees to get physicals using their health insurance, but said he had not gotten a physical since he was 16. "What's the point?" He asked. He felt fine—other than a little back and chest pain that came with exertion, but insisted that the remedy was less exertion. Then he revealed that his blood pressure was a little elevated when he checked it at a church health fair.

I explained to my friend that we must take care of ourselves medically. This is especially important as we age. Getting a physical is like getting a checkup for a car, and many medical conditions—such as diabetes and hypertension—can be treated effectively if diagnosed at an early stage.

I told Joe about a recent patient of mine who was 54 years old, 15 years older than we were, who suffered a major stroke. The patient's medical history showed uncontrolled high blood pressure since he had received his first diagnosis—15 years before his stroke. In an interview with the hospital physician, the patient said he believed his blood pressure was unimportant because he felt fine.

This patient most likely would not have suffered from the stroke had he received effective treatment from the start and been compliant with his medication for the last 15 years. Instead, the patient can no longer walk and had to leave his job due to his disability.

During my last visit with him, he tearfully told me he would be a burden to his family for the rest of his life.

After our conversation, Joe agreed to get his chest pain evaluated, and together, we went to the hospital.

Later that evening, he received his diagnosis: severe hypertension. The emergency-room physician said Joe could have had a heart attack at any moment. Shaken, Joe said that he was going to assume responsibility for his health—he wanted to live.

Like my stroke patient, Joe had a poor perception of reality regarding his health. Both had a little Peter Pan in them, living like they would always be young and assuming they were exempt from checkups.

Joe found out he had to grow up.

Read More
The book that named it: "The Peter Pan Syndrome: Men Who Have Never Grown Up" by Dr. Dan Kiley (1983; 1984 paperback, Avon Books, out of print but available used).