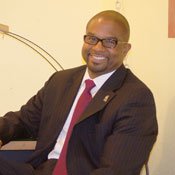 Cobby Mondale Williams has a classic Washington, D.C., resume. A Jackson resident since age 2, Williams graduated from Murrah High School and Jackson State University. He went to graduate school at Howard University in Washington, D.C., spent a year as an emissary to Ethiopia and worked for the U.S. Department of Agriculture as public-affairs specialist. Whether that experience makes him qualified to represent the 2nd Congressional District will be up to voters this fall.

Williams, 35, is running as an independent against incumbent U.S. Rep. Bennie Thompson, a powerful 18-year veteran. Bill Marcy and Lajena Williams (no relation to Cobby) of the Republican Party and Reform Party, respectively, are also on the ballot.

Beyond just being young, what can you offer that's different from what the district has been getting for the past 18 years?
I don't need to be told where the bathrooms are on the Hill. With all my contacts, I'm going to hit the ground running in starting to build this district back.

How does your youth-centered message resonate with what I would imagine are older voters in the Delta?
I approach the situation with the aspect of them having kids and grandkids. I hear from them themselves and they say, yeah, it's time for a change. They feel they've lost Generations X and Y, and I'm part of that generation.

It starts at education, no matter how you look at it. What I mean by education is, as part of my platform, I believe in community development. ... I want to improve teacher quality, create a quality early-childhood education system. With that, I will be ensuring that (in) the great state of Mississippi, as well as the 2nd Congressional District, our youngest citizens will receive the highest quality education.

Right now Mississippi is debating charter schools, which President Obama has supported. Where do you come down on the issue?
It's pros and cons on both sides. However, I support whatever it's going to take to move the 2nd Congressional District school system forward.

We believe (in) creating a dual track in high school, meaning when you get into high school you're going to decide if you're going to head down trade or go down the traditional route of education, so we're giving you options now. That way we can build a workable educational force.

(When) we have the education piece down pat, it creates a better work force. When it comes to work-force development, I want to develop a plan to attract and retain highly educated workers, with particular emphasis on STEM (Science, Technology, Engineering and Math).

What about those health disparities that we always talk about?
We need to start eating healthier foods. I want to build another food bank. We only have one in Jackson. If we had better access to healthier food, we'd have a healthier worker, healthier families. In addition to all that, I'm going to target transportation. ... If we open up our ports and our river banks and expand on them, it would create jobs and enhance the scenery.

Yeah, but what congressional com­mittee has oversight?
It's basically under the Mississippi Department of Transportation.
(Note: The U.S. Army Corps of Engineers is part of the Department of Defense, which the House Armed Services Committee oversees.)

Any other pet areas of yours?
Agriculture would be one, because we have a lot of barges. We have oil and gas being transported, a lot of commodities flowing in and out of here. Anything dealing with agriculture, transportation and health, and anything aimed at creating a green economy are committees I definitely aim to sit on.

What's a policy position that you hold that people might be surprised about?
It would be poverty. I don't believe in giving out handouts. There's a lot of people out in these communities who don't want a handout, they want jobs.

What would people be surprised to know about you that they can't find on your website?
I was shot right over there by Callaway High School, and I have the bullet still left inside of me, in my pelvic area. ... My brothers and I went over there to shoot basketball. We didn't expect anything to happen. I was the first one to get shot. (The gunman) walked up to me and shot me.

Was it a dispute over the game?
I don't remember. You know how things happen so quick, you just don't remember. ... The second time I almost lost my life, I had a very bad car wreck coming from New Orleans. I tore my car up. I almost died; I had a puncture in my spleen.

Then you ran against Bennie Thompson in the 2nd Congressional District.
That's not suicidal. That means I've built up the momentum and the wherewithal to have the guts to do such a thing. I see it as fun. It's exciting.

WOW! was this a real interview or a joke?

That first question is classic! LOL