Laughing All Over Again 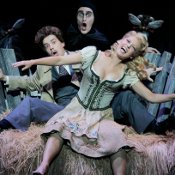 Mel Brooks' stage production of "Young Frankenstein" is in Jackson May 8 and 9. Warning: Hilarity will ensue.

Fans of the original Mel Brooks movie "Young Frankenstein"—or anyone who is just looking for a good time at the theater—should check out the Broadway musical coming to Thalia Mara Hall May 8 and 9. W. Kessler Ltd. Is bringing the musical version of "Young Frankenstein" to Jackson for what is sure to be an evening full of hilarity, Broadway-caliber performances and great music.

Jeff Whiting, the tour director and assistant choreographer of the original production, promises you'll see all the iconic scenes from the movie as well as new material Brooks wrote specifically for the stage.

"The musical takes a lot of the lines and moments that were so great from the film and explores them more fully," Whiting says.

In the musical, many of the movie's best lines are now full-length songs in classic Broadway style. "This isn't just the film on stage," Whiting says. "The audience is going to have some great surprises; they're going to see the cast dance in ways they've never seen before and have a wonderful night of entertainment."

Averyell Kessler, who is responsible for bring the production to Jackson, says that Brooks' movie has always been one of her favorites.

"I think it's just hysterical, and I couldn't resist having it here on stage," she says. "We decide what to bring in based on what our community will enjoy the most. I think it's going to be a fabulous evening of laughter and fun for all of our audience members. It seems right now we could do with a little laughter in our lives."

Booking the touring production of "Young Frankenstein" was no easy task. "It's a jigsaw puzzle," Kessler explains. "We have to match (Thalia Mara Hall's) available dates with the company on tour all over the country. It's a bit involved."

For those who aren't familiar with "Young Frankenstein," the show is a parody of Mary Shelley's book "Frankenstein," first published anonymously in 1818, and of classic (and kitschy) horror films such as those starring Bela Lugosi. Brooks' fans know that he has a distinct knack for satire.

The show, like the film, tells the story of Dr. Victor von Frankenstein's descendent, Frederick Frankenstein, who is trying desperately to rise above his grandfather's infamous reputation. He travels to Transylvania after inheriting the original Frankenstein mansion. Discovering the secret laboratory and journals of Dr. Frankenstein, his grandson decides to resume the doctor's experiments in reanimation. Hilarity ensues when the grandson of another character, Igor, brings Frankenstein an abnormal brain for his experiments, thinking it was the brain of someone named "Abby Normal."

The original Broadway production first appeared in 2007 and was hugely popular. This was due in part to Brooks' involvement in its production. "He was there every step of the way," Whiting says. "During the production, Mel was there writing new material and perfecting the timing of every joke. There's never a dull moment with Mel."

The film and the Broadway production were enormously successful, and the producers took the show on the road in 2009. "There was a lot of excitement about the story," Whiting says.

Taking a Broadway show on tour creates many challenges for a theater cast as well as some rewarding opportunities. The road troupe had about six weeks of rehearsal to get ready.

Today, the production appears in several different theaters each week. The constant moving is the biggest challenge, not just for the cast, but also for the crew. They left only a few of the stage elements from the original show behind, and setting the stage requires elaborate planning. Some of the scenery and set pieces from the first act are loaded onto trucks during the second act.

The work is worth it, though. "Those who have seen the original and the tour version will notice very few differences," Whiting says.

"Those who know and love the film still have a surprise waiting for them," Whiting says. "Come relax and have a great night of comedy."