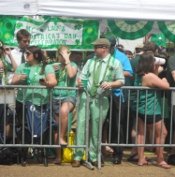 This reveler's green suspenders, tie and newsboy cap earned him the Most Dapper Spectator award in my book.

Living in downtown Jackson is fantastic all year long but it is even more wonderful on what is one of the best weekends of the year. I speak, of course, of Mal's St. Paddy's Parade weekend. This year marked the parade's 30th anniversary, so I knew I'd be in for lots of nostalgia. Turns out, it was a weekend that led me to reflect on my downtown history, to be grateful for the neighborhood I've come to know and love over the past five years, and to look forward to what's ahead as downtown continues to evolve and grow.

Being in a place that quickly became a downtown institution (and is a deeply meaningful place to me) seemed an appropriate way to start a weekend that's all about celebrating what is uniquely Jackson. Several other downtown neighbors were at the bar enjoying a quiet pre-parade night and, as we chatted about plans for the next day, I looked forward to the revelry. Being in the restaurant, though, reminded me that late chef and owner Craig Noone's signature green suit would be missing this year. St. Paddy's seems to hold a special, almost sacred place in the hearts of those who are passionate about this city, and nobody's passion ran deeper than his.

The restaurant and the memories remind me to keep loving Jackson, keep giving to it, and to keep enjoying all the people and fun it has to offer. That's exactly what the parade does, too. It is an understatement to say that we owe parade founder Malcolm White a huge thank-you for creating and growing it, while ensuring it remains "the people's parade." Perhaps just making sure to enjoy it with gusto is an expression of thanks, and I think everyone did that this year, as always.

My friends Tammy and Ramel Cotton and Maggie Middleton all live at a downtown property with a great balcony overlooking the parade route. They offered to play hosts-with-the-most for a pre-parade gathering of friends. Of course, on parade morning, I woke up at 6 a.m. feeling like a kid on Christmas. Well before parade time, I had donned my green sequined shorts, applied sunscreen, walked around to see the early tailgaters arriving and eased my way into the day with some Champagne. (Breakfast beverage of parade champions?) The balcony quickly filled with breakfast food, Guinness cupcakes, friends and, yes, some obligatory green Jell-O shots.

After a morning of enjoying the view from above, we headed to the street for the main event. It's always a thrill to see the crowd on Capitol Street—young and old, all races, all having a great time. A few highlights of this year's parade: the live camel and the marriage proposal in front of the judges' stand.

Some folks like to say that after the party, there's the after-party, but for me, after a party, the next day's rehashing of events is fun, too. So Sunday afternoon, when I received a text from another downtowner that folks were going for an early dinner on the patio at Wasabi Sushi and Bar (100 E. Capitol St., Suite 105, 601-948-8088, wasabims.com), I eagerly replied that I'd be there, of course.

Enjoying the company of friends on a spring evening and talking about the fun we'd had the day before, our conversation soon turned to more important issues facing our state. It was on to politics and getting involved to change things that matter to us. It wasn't the conversation I'd expected, but it perfectly punctuated the weekend, because to continue to make Jackson great, we need to be people—like Malcolm, Craig and all those who have come before us with visions they made tangible—who talk about things, come up with ideas, and then go out and make our ideas real.