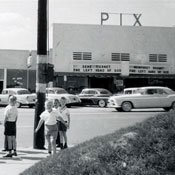 The Pix/Capri has seen better days—and XXX-rated ones.

Fondren's only movie theater got its 15 minutes of fame as a 1960s-era movie palace in the movie "The Help," but it hasn't been open for regular business for years. It's also had what one could call a patchwork past.

The Pix/Capri Theatre, located at 3023 N. State St., is a former 500-seat movie theater built in 1939. Van Downing opened the theater as the Pix in 1940 as a venue for newly released movies, CinemaTreasures.org reports. It was also sometimes used for live performances.

For five years after its closing, performing arts groups rented the theater for plays and other live performances. It was sold and reopened in August 1962 as the Capri Theatre, according to CinemaTour.com. The neon sign for the Pix remained vertically on the side of the building, but the name Capri was added to the overhang awning in the front. The Rogue, the local men's clothing store, opened upstairs in the Capri in 1967 and operated until 1972 when it moved to its current location.

The theater did well until the 1970s when competition from multi-screen theaters around Jackson drastically lowered income for the theater. Unable to afford newly released screenings any longer, the Capri switched to second-run and bargain films.

By the 1980s, the Capri had once again closed and reopened under new management. By this point, in what was widely viewed as a desperation maneuver, the new owners used the theater for X-rated films. It also showed cult classics and foreign films such as the Maysles Brothers' "Gimme Shelter," Ingmar Bergman's "Persona" and Werner Herzog's "Nosferatu the Vampyre," according to Jerry Dallas in the article "Movie Theaters in Twentieth-Century Jackson, Mississippi."

Alas, the Capri closed once again in 1985 and was only used sporadically for special events. At one point, BeBop Records was also upstairs.

In 2004, the Pix/Capri was added to the Mississippi Department of Archives as a historical landmark. The Fondren Renaissance Foundation soon reopened the theater as a live and musical venue with plans to revitalize it. However, the FRF gave up the project in 2007. The Crossroads Film Society started renting the theater in the summer of 2007 for movies and live performances (such as "Rocky Horror Picture Show"), and local bands perform special shows in the venue.

The Pix/Capri building is still in use today as a live performance, independent film and indie-music venue. Many Jacksonians hope to see it re-open as an indie-movie theater in the middle of the poplar local-business strip. As we went to press, we learned that Jason Watkins, son of developer David Watkins, is buying the Pix/Capri but was unavailable for an immediate interview.

Just to add to the list: Fondren Theatre Workshop produced David Mamet's "American Buffalo" in the lobby/storefront area in May 2006. In October of that year, they built the stage in the main auditorium (which has since been used by live bands, etc.), and produced the Broadway stage version of "The Rocky Horror Show," which they produced a second time at the Pix in October 2008.

For the record, this photo was taken by Christine Ezelle in 1960. I'm the kid on the right running towards the camera. The others are my two brothers, a cousin, and an assortment of neighborhood friends.

Frank, please accept my apologies for the error in the photo credit. It is fixed now. Thanks for letting us know.

Ronni, no apology needed and thanks for fixing the name--I'm probably the only one who actually looked at the photo credit. My mom got a big thrill out of seeing one of her photos in print.