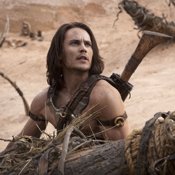 Taylor Kitsch plays time-traveling Confederate soldier John Carter who transports to the planet Mars. Will he conquer in this quarter-billion dollar Disney extravaganza?

Disney imagineers went stark raving mad creating "John Carter," a $250-million movie based on Edgar Rice Burroughs' series about a Confederate war veteran transported via magic medallion from the Wild West on Earth to Mars. The ailing planet, which the indigenous people call "Barsoom," is going down the black hole thanks to greedy, selfish warmongers charged up by electric blue forces from the ninth ray.

What Were They Thinking?
Oh, Mother of Isis, can you imagine the writing sessions leading up to "John Carter"? I envision a dimly lit conference room. Academy Award winner Andrew Stanton (who also wrote "Toy Story," "A Bug's Life," "Finding Nemo" and "WALL-E") heads the table. His sleeves are rolled up, as are those of his compatriots, Mark Andrews (a talented story-board artist) and Michael Chabon (who won a Pulitzer Prize for "The Amazing Adventures of Kavalier & Clay"). Smoking is prohibited, but the trio puffs on some Cuban cigars for a bit of a buzz. Minions place on the table 5-foot stacks of folders containing notes from the 79 years this movie has been in pre-production.

The energy in the room goes into warp- speed as the writers explore different "what if" scenarios. What if we pluck elements from "Star Wars" and "Star Trek," then add some "Indiana Jones," scare it up with some "Transformers," "Braveheart," and "Gladiator" elements, add in leaps and bounds from "Superman," "Wonder Woman," and "Xena, the Warrior Princess," mix it up with a few classical twists from "Stage Coach" and "The Wizard of Oz" (exchange ruby red slippers for magic medallion and repeat mumbo jumbo and you're home), and, well, there's got to be a dog, but a Martian dog with a blue tongue who resembles a bulldog.

Put it all into the cinematic blender, and the result is a megalomaniac, operatic extravaganza. Michael Giacchino's score perfectly suits the epic breadth of the film, and Stanton, who also directs the film, seems to have a lot of fun putting it together.

Some reviewers have been smack-talking Taylor Kitsch (known for his work in "Friday Night Lights"), who portrays John Carter. In a completely unbelievable film, Kitsch is at home. He squints like Clint, utters dialogue in the right note and has perfect pectorals. He works, and he's easy on the eyes.

So does Lynn Collins, the princess of Mars—I mean, Barsoom—whose gorgeous blue eyes and black hair conjure up the immortal Elizabeth Taylor. Collins is terrific. She's Julliard trained, which explains her ability to squeeze lemonade from the lemons hurled her way.

Further, those who condemn this film fail to understand JC's educational teachings. As a threshold matter, this movie offers a "Where's Waldo?" Experience for movie buffs. The game is to match the scene to the original movie. (Hint: see above.) But more importantly, "John Carter" teaches us important survival skill sets for Mars—I, mean Barsoom.

Never, ever toss out the magic medallion. You may need it to return to Earth.

Never, ever tell aliens where you are from. If you say that you are John Carter from Virginia; they will call you Virginia. This leads to unnecessary gender confusion.

When indigenous beings from other planet request that you jump, you better jump. Not only are they bigger than you and have four arms, but your contrary behavior will get other nice aliens in trouble.

Always make friends with alien dog creatures. They will save your butt at the crucial time. They also run faster than you and can clean you up in a single lick.

This is a science thing, but when on other planets, gravitational forces are significantly altered. You will not bruise, you will not age, you are able to wear the same clothes day in and day out and not stink, and you can defend yourself and survive against armies of aliens.

The key is that you are a rebel without a cause—only you really have one, which is why you win the day. I hope you are as ready to take on the universe as I am.

I used to read the novels and comics of John Carter of Mars. THey were written by Edgar Rice Burroughs origionally. THe art of the comics thrilled and inspired my imagination. I was hoping this film would do it justice. Going to see it soon.

I'd never heard of John Carter before reading this article, and I definitely didn't know they were based on comics (comic-to-film seems to be a trend lately). Let us know how the movie stacks up to the original, Kenneth!

Saw this in IMAX 3D. Totally awesome. Loved the books when I was younger. Never saw the comics. This is not high art, but it is incredibly entertaining. Very nice story arc of John Carter going from anti-hero to true hero. Takes its time, and, for a fantasy flick, makes sense, internally at least. Internal consistency is the only thing one may ask for in such a movie. And yes, the more cynical among us can certainly claim "been there, done that," but John Carter is not stealing, it is standing on the shoulders of giants. There is much more interaction (and logic) than say the mindless Transformer movies. There is a real plot. It may not be A New Hope, but it surely isn't Phantom Menace, either.

"It may not be A New Hope, but it surely isn't Phantom Menace, either." Great way to put it. :)