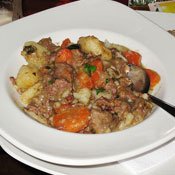 Ireland is known for its hearty meals of meat and potatoes, and for its most famous dish: the Irish stew. It is the national dish for the country, and is thick, hearty and filling.

Over the years, the ingredients have changed from the traditional recipe, which included potatoes, onions, parsley and lamb or mutton. When some Irish migrated to the United States to escape the Great Famine, they had to adapt to locally available food. Sheep were not as common in the United States, so cooks began using beef instead. Cooks added various new ingredients to fit the taste of the maker. There are even gourmet Irish stews.