Up Where the Air is Clear 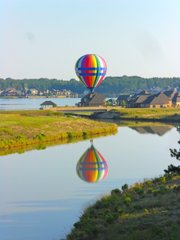 The skies in Canton will fill with vivid hot air balloons this holiday weekend.

Up early, the last thing the fisherman expected to see was a large balloon floating over the lake—just low enough for him to hold a conversation with the pilot. This experience is just one that Ken Johnston recalls from his 18 years of being a balloon pilot. "You have a view that most folks have never seen," Johnston says. "You can really absorb it and take in what's in front of you."

All it took for Johnston was a single experience assisting a pilot at a show in Greenwood in 1989. Since then, the journey toward owning a balloon began. "You're either going to love it or hate it," Johnston says of flying in hot air balloons.

He and his wife, Leigh, now own two hot air balloons. Together as pilot and "crew queen," they form the team behind the balloon HiLEIGH Kentagious.

One competition involves pilots dropping a beanbag on a large cloth "X" on the ground. The pilot who throws the bag closest wins. Another competition requires capturing a ring while flying.

In 2006, the Mississippi Championship Hot Air Balloon Fest and Canton Parks and Recreations collaborated with The Good Samaritan Center to revitalize the event. Kathy Clem, the executive director of Good Sam, sees the balloon event as a great public relations event and fundraiser for the non-profit organization.

Good Sam provides social services to those in need. "We help hundreds of people a month with free clothing, and we do a lot of food assistance," Clem says. "Up to six to seven thousand meals a month."

All funds raised go into Good Sam's direct services. "We try to make sure our food is healthy but a complete meal. A lot of times we have to actually go and buy food to supplement the free food and the very-low-cost food that we get," Clem says. "You might have ground beef, you might have spaghetti noodles, but you need the sauce to put it together."

The Golf Ball Drop is a major component to the fundraising at the Mississippi Championship Balloon Fest. Good Sam sells golf balls—last year they sold 700—that drop from hot air balloons at the festival. Whoever bought the ball that falls closest to a designated mark wins a prize.