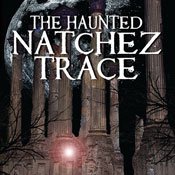 "The Haunting of Mississippi" by Barbara Sillery (Pelican Publishing, 2011, $17.95) sucked me right in to Mississippi's rich, haunted history. Sillery eloquently describes the settings of her stories, so I could easily visualize each of the places she writes about. I felt like the ghosts at McRaven were hitting me, like I was the one who had to be moved from my table at the King's Tavern because Madeline was swinging the chain harder and harder at me.

The multiple stories of the Klein family in "Cedar Grove Inn & Restaurant" are particularly captivating. You'll find out about Mr. Klein, the cigar smoker who, even after death, can't kick his smoking habit. At Cedar Grove, you'll meet young Willie, who was shot in the chest, and the Bonnie Blue room where little ghosts play. The best part about Cedar Grove's tale, though, is when Phyllis, the Inn's owner, states the similarities between her daughter, Colleen, and the Kleins.

At some points, I was scared out of my bones while reading "The Haunting of Mississippi." Because I was miles away, I knew that it was ludicrous that I felt as if the ghosts were watching me or touching me, but because Sillery described everything so well, I could see, feel and hear the ghosts. I often travel through Vicksburg, Natchez and Greenville, the settings of some of Sillery's ghosts. What if one day the ghosts decide to drift away from the places they're haunting, and they find their way to Highway 61?

Some of the stories are more believable than others. The ghost in "The Indian Chief at King's Tavern in Natchez," for instance, wears a feather headdress, but the story's postscript states, "Natchez Indians did not wear the full feather headdress often associated with Plains Indians. ... If guests at King's Tavern do see a vision of an Indian chief in full headdress peering in the window, he must have traveled very far indeed from his ancestral homelands." I just can't fathom someone traveling in full dress just to see a tavern—no matter how nice—in Mississippi.

For the most part, Sillery writes the stories they way they were told to her, and they are fairly straightforward. When she suddenly cut from the story in "Linden," however, it was confusing.

"Jeanette interrupts her own tale," she writes. "'Someone has to tell me something is wrong, so that I can go and get a new mattress; I can't go around and test all of them.' I nod in agreement once more, hoping we'll get back to the story. No problem.

"My hostess returns to the scene and now quotes the wife who's had trouble sleeping. 'No, it wasn't the mattress. I woke up because there were people in the room—two men, a woman, and two children standing at the foot of my bed.'"

I have to give the woman kudos; if I had seen five people standing at my bed, I would have checked out immediately.

Because the tales are supposedly true, and they touch close to home, "The Haunting of Mississippi" does double duty: It will scare you and teach a little of Mississippi's haunted history.

Some of the ghosts and haunted places included in "The Haunting of Mississippi" are also covered in "The Haunted Natchez Trace" (The History Press, 2012, $16.99) by Bud Steed. The King's Tavern's ghost is one example. After reading both books, it's easier to believe in the ghostly Madeline because they tell the same story. I concluded that either the authors interviewed the same person—and the interviewee was good at keeping their story straight—or the ghosts at King's Tavern are real.

Because the Trace meanders into Alabama and Tennessee, "The Haunted Natchez Trace" includes ghost stories from those states as well as several in Mississippi. Steed's book doesn't have the same scare factor that "The Haunting of Mississippi" has. It is considerably shorter, and the writing is more factual than story telling.

My personal favorite in "The Haunted Natchez Trace" is the story of Louise the Unfortunate. Louise's tale is a sad one but, in a way, it is uplifting. No one knows Louise's last name. The legend is that she originally went to Natchez to be married. She couldn't find her fiancé, and she didn't have the funds to leave, so she started working "respectable" jobs for women such as teaching, nursing, being an office assistant and housekeeping. Eventually, she drifted to a less respected part of Natchez, taking jobs as a waitress before becoming a prostitute. Louise's tombstone in Natchez is not one of a destitute person, and no one knows who paid for it.

Both "The Haunting of Mississippi" and "The Haunted Natchez Trace" are full of photos of the ghostly places the authors take you to, making it easy to visualize the stories' settings. If you don't mind a few chills, they are both easy reads and will give you plenty of spooky stories to tell.