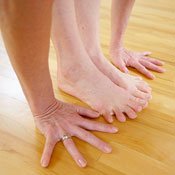 Exercise, such as yoga, and managing your stress can help minimize symptoms of fibromyalgia.

It was 1999. I was sitting on the edge of the exam table, staring at my feet dangling off the side and fiddling self-consciously with the white paper covering the table. Why was I so exhausted, yet having sleep disruptions? Why did seemingly every joint in my body ache almost constantly? I had lived with these symptoms for a while, sucked it up and kept on trucking. But now, sitting in the low seat of my Mustang for more than 15 minutes made tears well up from the dull pain shooting through my hips, down my legs, all the way to my knees.

After an exhaustive battery of (thankfully) negative tests, my doctor said the "f" word: fibromyalgia. Initially, I was defensive, especially when he prescribed an anti-depressant along with an anti-inflammatory. We went back and forth over the anti-depressant issue. I accused my doctor of assuming my symptoms were psychological. I wasn't some hypochondriac searching for attention. This was real!

To his credit, he was patient with me. No, he explained, he didn't think this was in my head. Certain anti-depressants were helping other patients.

At that time—13 years ago—the medical community had no definitive test for fibromyalgia and really wasn't sure what caused it or how to classify it. It was a diagnosis by elimination. According to the research I've done, it still is.

Just like in 1999, it's a condition surrounded by "I don't know." No one knows what causes fibromyalgia, and no quantifiable diagnostic tool exists for detecting it.

"It's a very strange medical condition," said Dr. Timothy Quinn, a family doctor in Ridgeland and a contributor to the Jackson Free Press. "You can help a person feel better, but in the majory of cases, there is no cure."

The National Institute of Arthritis and Musculoskeletal and Skin Diseases defines fibromyalgia as "a disorder that causes muscle pain and fatigue" and cites the presence of certain "tender points" on the neck, shoulders, hips, arms and legs in people diagnosed with it. These tender points hurt when even slight pressure is applied. Symptoms of fibromyalgia can include difficulty sleeping, painful menstrual periods in women, tingling or numbness in the hands and feet, or memory problems.

Fibromyalgia affects 2 to 4 percent of the population, mostly women, the American College of Rheumatology's website states. Certain events such as spine problems, injuries, or physical and emotional stress can set off fibromyalgia. The condition is associated with other health problems as well. The American College of Rheumatology reports that those who suffer from fibromyalgia may also have depression, anxiety, headaches and irritable bowel syndrome.

In 2011, the Centers for Disease Control and Prevention reported that working adults with fibromyalgia missed an average of almost 17 working days per year, and that death rates from suicides were higher among people with fibromyalgia than among the general population.

The good news is that fibromyalgia sufferers can manage their illness. I've had to make some lifestyle changes. I still have some bad days, but now, fortunately, my good days outnumber my bad ones by far.