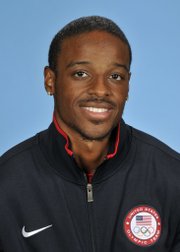 Born in Junction City, Kan., in 1990, U.S. Olympic Track Team member Isiah Young competed in weight lifting at Junction City High School. He spent two years at Allen Community College in Junction City, where he became Male Track Athlete of the Year. He then enrolled at University of Mississippi for his junior year, where he set the school record in the 200-meter dash with a time of 20.32 seconds.

Young's year got even better at the U.S. Olympic trials, where he finished third in the 200 meter, setting a personal best time of 20.16 seconds. Only Wallace Spearman and Maurice Mitchell finished ahead of Young.

The men's 200-meter Olympic competition is from Aug. 7 to Aug. 9. For a collegiate athlete like Young, just making the finals of the 200-meter would be a major accomplishment.