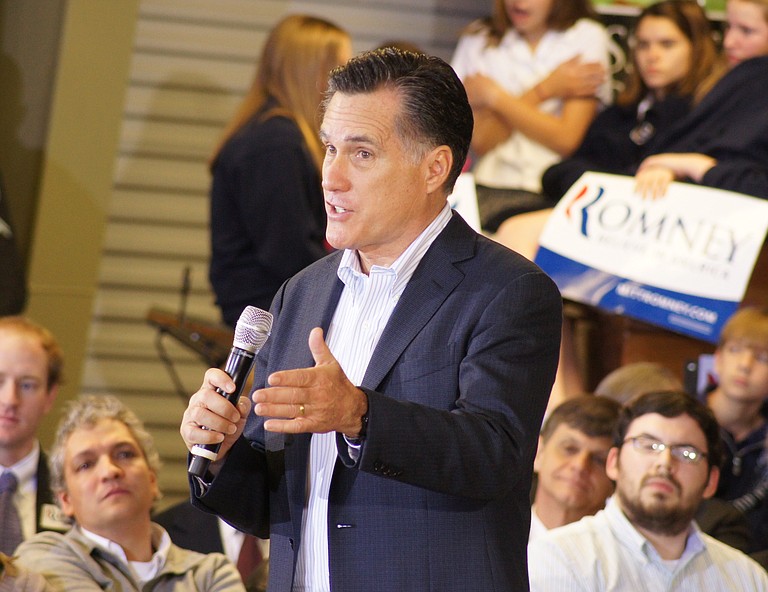 Mitt Romney is running for president on a platform of returning many costs to the states. R.L. Nave

LONDON (AP) — Republican presidential candidate Mitt Romney caused a stir in Britain on Thursday by questioning whether the country is prepared to host the Olympic Games without a hitch and scheduling a fundraiser with the former head of a troubled bank.

The former Massachusetts governor visited with British political leaders as part of a larger effort to show he has what it takes to represent the U.S. on the world stage. But instead of highlighting ties with the America's staunchest ally, Romney may have embarrassed the Brits instead.

British Prime Minister David Cameron offered a blunt retort to Romney and other doubters, saying they will "see beyond doubt that Britain can deliver."

The stir came on the first full day of Romney's first international tour as the GOP's presumptive presidential nominee. With the U.S. still fighting one war and facing foreign policy challenges across the globe, Romney is seeking to convince American voters that he's prepared to serve as commander and chief, despite limited foreign policy experience.

He will visit three allies — England, Israel and Poland — in the coming days while appearing Friday at the Olympic opening ceremonies to help remind voters of his personal Olympic experience. Romney led the 2002 Winter Games in Salt Lake City, Utah, and used the games to launch his political career.

But his foreign trip got off to a shaky start.

Romney openly doubted whether Britain could handle the games, saying it was unclear whether issues that have dogged the final preparations could be overcome.

"It's hard to know just how well it will turn out," Romney told NBC News in an interview on Wednesday, two days before the opening ceremonies.

He later met with Cameron and they discussed the Olympic Games as well as alliances in Afghanistan and Syria, among other countries.

Romney declined to answer questions on whether the West should do more to intervene in Syria, suggesting that he didn't "want to describe foreign policy positions I may have while I'm on foreign soil."

Earlier Thursday, Romney and Cameron seemed to address each other through the media after Romney doubted Britain's preparedness for the Olympics. Romney suggested it's impossible for any Olympic Games to go off without a hitch; Cameron said Romney and others would soon see that England is up to the challenge.

Romney backed off his initial comment after meeting with Cameron.

"I expect the games to be highly successful," Romney declared after the meeting.

At the same time, Romney faced scrutiny for a London fundraiser Thursday night that's expected to attract employees of Barclays, which has been in the spotlight after becoming the first bank to admit its employees were involved in manipulating a key market index.

Last month, U.S. and British agencies fined Barclays a total of $453 million. In the wake of that shock, chief executive Bob Diamond resigned. Diamond had been scheduled to attend the fundraiser at the Mandarin Oriental hotel in the tony Knightsbridge district, but has pulled out. He already had sent Romney a check for $2,500.

Romney sought to steer the conversation away from the controversies.

"The world is a tumultuous and dangerous place," Romney said Thursday. "And certainly in many of the regions around the world we have great interests in having a common effort in seeing greater peace and prosperity."

As he met with British leaders past and present, the Republican also praised "the unique relationship that exists between our nations, our commitment to common values, our commitment to peace in the world and a desire to see a stronger and growing economy."

Romney, whose decades in private business gave him ample exposure to international affairs, is a former one-term governor untested on the world's political stage. He hopes to convince voters back home that he is no novice on foreign affairs and that they should feel confident electing him as president in a complex world and with the U.S. facing a myriad of security threats.

During the public portion of his meeting with Cameron, Romney weighed in again after his comment about the Olympics drew attention across Britain. "It is impossible for absolutely no mistakes to occur," he said. "Of course there will be errors from time to time, but those are all overshadowed by the extraordinary demonstrations of courage, character and determination by the athletes."

Meeting with British officials is typically one of the first priorities of any new president, and establishing those relationships beforehand can help smooth any transition. It's not unusual for American presidential candidates to meet with British leaders during the campaign; Obama did so when he took a trip abroad as the likely Democratic nominee in 2008.

Romney's weeklong trip also will take him to Israel and Poland.

On Friday, Romney is scheduled to attend the opening ceremonies of the London Games.

This wasn't Romney's first meeting with Cameron; the two talked when Romney visited London in 2011. Cameron visited the U.S. earlier this year to meet with Obama and attended a White House state dinner, but he did not meet with Romney.

The meetings come a day after the Daily Telegraph published a story quoting an unidentified Romney campaign adviser saying the Republican believes the U.S. relationship with Britain is special because of shared "Anglo-Saxon heritage" that the adviser said the White House doesn't appreciate.

Romney, however, quickly distanced himself from any such view.

"I don't agree with whoever that adviser might be," Romney told NBC News, "but do agree that we have a very common bond between ourselves and Great Britain."

Nonetheless, Vice President Joe Biden and top Obama aides criticized Romney. "The comments reported this morning are a disturbing start to a trip designed to demonstrate Gov. Romney's readiness to represent the United States on the world's stage," Biden said.

Accompanying Romney to some of his meetings Thursday were former Missouri Sen. Jim Talent, an adviser, and Kerry Healey, who served as lieutenant governor when Romney was governor of Massachusetts. Three of Romney's sons — Tagg, Josh and Craig — also have joined him in London.