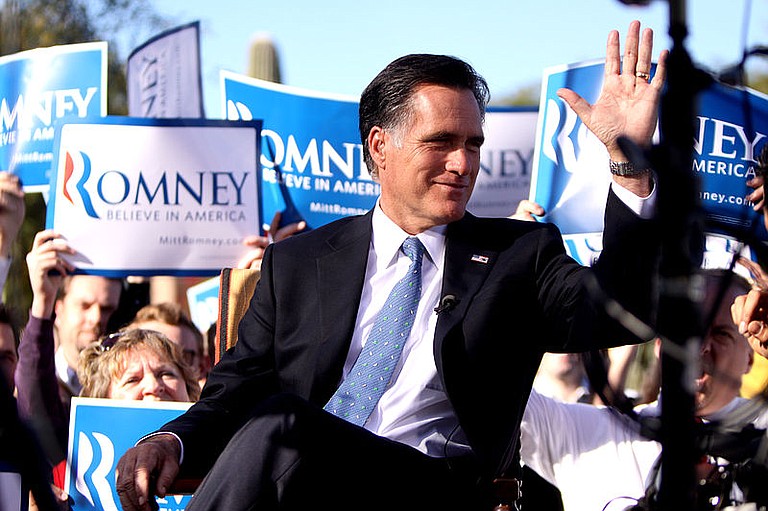 For Romney, who seeks to boost his foreign policy credentials as he begins a high-stakes trip abroad, a lack of specific proposals has exposed him to a flurry of criticism from Obama and his surrogates. Just over three months from Election Day, the president's team has dug in on its efforts to cast the Republican as a national security lightweight while trying to capitalize on Obama's strength on such issues.

"When he does venture a position," Biden said, "it's a safe bet that he previously took exactly the opposite position and will probably change his mind again and land in the wrong place — far out of the mainstream."

Romney's campaign has swatted away that criticism, but it's also shown few signs that the presumptive GOP nominee will offer more specific areas of contrast with Obama when he meets with world leaders overseas. Instead, Romney has continued with broad jabs casting Obama as a timid leader.

"If you do not want America to be the strongest nation on earth, I am not your president," Romney told the veterans group. "You have that president today."

Romney said he would reset Obama's reset with the Kremlin, but he did not elaborate on how. On Afghanistan, he accused Obama of making politically motivated decisions on drawing down U.S. force levels. He said that, if elected, he will call for a review of the transition in Afghanistan — but with the same goal as Obama of ending U.S. combat operations in 2014.

Romney also said he will restore the U.S.-Israel relationship and make the Jewish state his first foreign destination as president. He said he would increase military assistance to Israel, though the Obama team says the administration has already provided Israel with record levels of security assistance.

The foreign policy fight was expected to continue after Romney arrived in Europe on Wednesday to begin a six-day, three-country tour and Obama pushes on with fundraising events at home. The president was jetting from Seattle, where he raised money Tuesday night, to New Orleans for more fundraisers and a speech to the National Urban League.

In an election year dominated by the economy, it could be the last phase of the campaign focused on foreign policy.

That could be good news for Romney, who polls strongly on the economy but has been unable to cut into Obama's advantage on national security issues. The Obama administration's counterterrorism fight against al-Qaida and especially the killing of Osama bin Laden have undercut longtime Republican efforts to cast Democrats as soft on defense.

An NBC News/Wall Street Journal poll published Tuesday showed Romney leading Obama 43 percent to 36 percent on which candidate is seen as better equipped to improve the economy. But the same poll showed Obama is seen as a better commander in chief, 45 percent to 35 percent. Last week, a CBS News/New York Times poll found 47 percent of voters said Obama would do a better job handling foreign policy, while 40 percent chose Romney.

Romney's overseas trip comes during a notably heated phase of the campaign, although the candidates dialed back their negative attacks over the weekend following Friday's mass shooting in Colorado.

From the start, things didn't go according to plan. Romney was greeted in London by a British media report that quoted an unnamed adviser to Romney suggesting that Obama doesn't understand the "Anglo-Saxon" heritage shared by Britain and the U.S.

Romney spokesman Ryan Williams said Wednesday that the quote was untrue. Williams said that if an adviser said that, the aide wasn't reflecting Romney's views.

Even so, Obama dispatched Vice President Joe Biden and strategist David Axelrod to criticize Romney over the comments in the Telegraph. The newspaper quoted the unnamed adviser as saying Romney believes the U.S. relationship with Britain is special because of shared "Anglo Saxon heritage" and that the White House doesn't appreciate that history.

Biden said the comment was "a disturbing" start to Romney's overseas trip.

White House spokesman Jay Carney said an overseas trip Obama took as a candidate in 2008 proved it was possible to adhere to that tradition while still offering substance. Obama kept up his criticism of Republican rival John McCain during that trip, but he avoided direct attacks on President George W. Bush.

"We'll see if that standard continues to apply," Carney said of Romney's trip.

Romney will attend the opening ceremonies of the Olympics in London on Friday night.

The ad shows clips of Olympic teams from various countries that Priorities USA Action says Romney has questionable links to, including China, which the ads says gained thousands of jobs through Romney's outsourcing of private sector jobs, and Switzerland, where Romney once kept a bank account.

In London, Romney also has meetings planned with British Prime Minister David Cameron and other top government officials. From there, Romney plans to visit Israel and meet with Prime Minister Benjamin Netanyahu, then wrap up his trip in Poland.