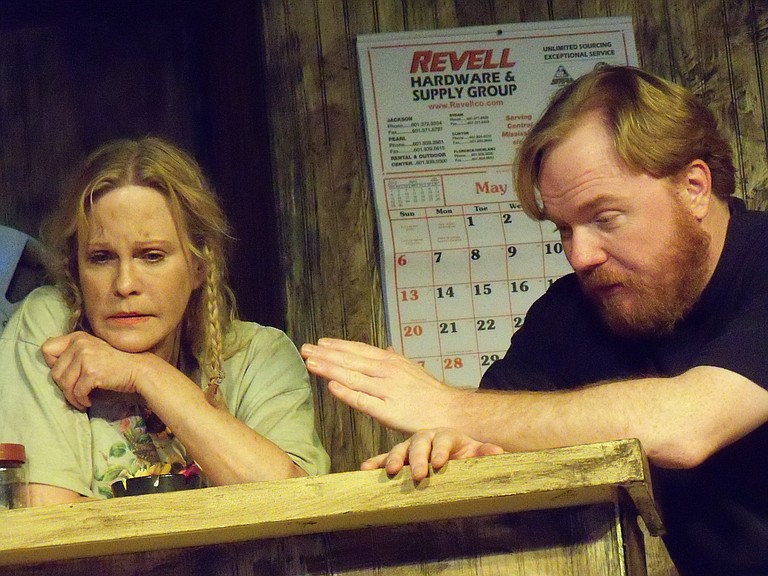 On a hot summer day in Fondren, the Duling Auditorium is a cool, shady respite from the heat that radiates from the pavement outside. The stage, ready for that day's rehearsal, is empty but for a few chairs and a small table. Away from where the yellow and blue glow of the stage light might strike her, Denise Halbach introduces herself to a security guard as the director of the play about to be rehearsed. "The play is called ... get ready for this, get ready ...," she says to the stoic guard. " It's called 'Buck Nekkid for Jesus!'"

"Buck Nekkid for Jesus" tells the story of a failing gas station owner, Billy Boston, who lives in the small town of Moon Mountain, "Missippi." Because of the sins of his past, Billy struggles to surrender to the love of Jesus. But when the eccentric faith healer Sister Lurleen Ruda Lee Pearl sees Jesus floating above Billy's head, she knows it's time to "go to work" on him, and to help him lift up his shame to the Lord.

Playwright and native Mississippian John Maxwell started writing "Buck Nekkid for  Jesus" in the mid '80s. It hit the stage for the first time at New Stage Theatre in 1996 and has since shown in Atlanta, Ga., Fort Worth, Texas, Birmingham, Ala., and Meridian.

Maxwell has been fiddling with the play since its conception. Now, on the ninth revision, the play will show again in Jackson, this time in Duling Auditorium July 25 through 29.

Maxwell grew up on a cotton farm two miles outside rural Pickens. "Holmes County really is the inspiration for 'Buck Nekkid for Jesus,'" he says. Being from a small town where everyone knows everything about everyone else, Maxwell was deeply inspired by past relationships when creating the play's characters.

Tightly conservative and legalistic views of religion do not fit into Maxwell's spirituality, and "Buck Nekkid for Jesus" mirrors this. "There's nothing wrong with glory and hallelujah on a mountain top," Maxwell says. "But when the cross meets that reality of life, that's when it's most effective. And that's what the play ultimately does. It takes the cross and sticks it down into the mire and muck of humanity."

To reach the core of humanity as natural sinners, Maxwell has not censored his writing by any means. Halbach admits that the language and content of the play are a bit audacious for the common conservative Christian attitude among the South. "It's gritty; it's a gritty play. But it's hysterically funny," she says.

But along with randy language and a deep look at the reality of the human condition comes redemption. "It doesn't look at faith and redemption the way the average religious drama does," the director says. "It's a little different, but that makes it even more effective."

"The play is riotous, and raucous and outlandish in a way," Maxwell says. "And the language is abrupt. But it also has, I think, a deep spirituality about it once you get through those bizarre characters and to the bottom of it, that really is right next to my soul."