Be Transparent, Mitt (and Haley) 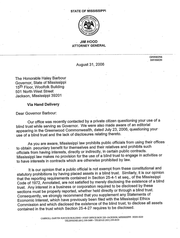 JACKSON — Amid all the clamor recently over Gov. Mitt Romney's financials—shell companies in Bermuda, Swiss bank accounts, apparent control of Bain Capital well after he says he left the company—one critic's voice rang a little hollow. In an interview with Wolf Blitzer on CNN, lobbyist-turned-governor-turned-lobbyist Haley Barbour, formerly of the great state of Mississippi, had this to say about Romney releasing his tax returns: "I would."

Apparently, Mr. Barbour doesn't anticipate getting the VP nod from Mr. Romney, or you'd think he'd be nicer to the candidate. And given his own shady dealings on personal financials when he was running for election and re-election as governor here, you think Barbour would be a bit more coy.

In 2007, the JFP wrote about Haley's feet-dragging on releasing information about his blind trust, and what, exactly, his ties were to his old firm, Barbour Griffin and Rogers (BGR), a high-powered GOP lobbying firm with Washington, D.C., offices. The true nature of his connection to the firm was answered in part soon after Barbour left office—he returned to BGR within hours of leaving the governor's mansion, according to a press release the firm issued. (Perhaps his governorship might fairly be characterized as a "paid sabbatical" from BGR?)

Barbour never made it terribly clear why he continued to get paid by BGR while he was in office. He called it, at times, "retirement" although BGR had no compatible retirement program anyone was aware of, and it was otherwise referred to as "profit sharing." It was especially worrisome because BGR was lobbying in the state after Katrina and representing casino interests.

Our story, "Haley's Shadow Money," during his re-election campaign in 2007, reported that Barbour's attorney, Ed Brunini, insisted that Barbour had done nothing illegal under state law. But Mississippi ethics law is very weak.

Bloomberg wrote that if Barbour has nothing to hide, he should honor the spirit of public accountability and offer full disclosure. But Barbour resisted even making his tax returns public even as governor—which ran counter to the actions of former governors. (Sound familiar?)

The Mississippi Ethics Commission said it couldn't tell if the governor had any conflict of interest with his position as governor because they didn't have enough information to make an evaluation. "We're not making up that answer," Ethics Commission Director Tom Hood told the Jackson Free Press then.

Now, we're in a similar boat with Romney refusing to release tax returns that, presumably, show stuff that could sink his aspirations or, at least, make him seem disingenuous. We can hope that voters bring more pressure on Romney to be transparent than Mississippians did on Barbour. It is unacceptable that a man running for president responds the way Barbour did as governor: "I won't."

How does your position on transparency for candidates compare with your position on transparency for government agencies and elected positions? Are you as angry that OUR justice department will not share the documents related to gun-running as you are about a former gov's personal tax returns from before 2002?
I hope you put the same vigor into seeing what OUR government did with our tax dollars as you are about seeing what people willingly paid Haley over a decade ago.

Are you asking for our Editorial position on non-sequiturs? We're against 'em! :)

This editorial is about one governor telling another governor to release his tax returns during a campaign, even thought that first governor was unwilling to do the same thing when he was running.

That really has nothing to do with a GOP-led House telling the Democratic administration that it's in contempt of that House for not revealing every last document the GOP House wants revealed. Particularly when the story itself seems likely to be http://features.blogs.fortune.cnn.com...">a tempest in a teapot.

Indeed, a six-month Fortune investigation reveals that the public case alleging that Voth and his colleagues walked guns is replete with distortions, errors, partial truths, and even some outright lies. Fortune reviewed more than 2,000 pages of confidential ATF documents and interviewed 39 people, including seven law-enforcement agents with direct knowledge of the case. Several, including Voth, are speaking out for the first time.

How Fast and Furious reached the headlines is a strange and unsettling saga, one that reveals a lot about politics and media today. It's a story that starts with a grudge, specifically Dodson's anger at Voth. After the terrible murder of agent Terry, Dodson made complaints that were then amplified, first by right-wing bloggers, then by CBS. Rep. Issa and other politicians then seized those elements to score points against the Obama administration, which, for its part, has capitulated in an apparent effort to avoid a rhetorical battle over gun control in the run-up to the presidential election. (A Justice Department spokesperson denies this and asserts that the department is not drawing conclusions until the inspector general's report is submitted.)