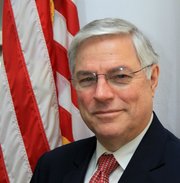 Mayor Chuck Jordan is about to declare Greenville, Miss., the Hot Tamale Capital of the World.

Mayor Jordan will announce the title in front of Greenville City Hall. Greenville, with a population of 35,000, is the largest city in the Mississippi Delta. It recently announced a festival for October: 2012 will be the first year for the Delta Hot Tamale Festival in honor of the popular dish.

The traditional tamale ingredients include ground pork and corn meal rolled in a cornhusk, adding a spicy mix to the southern-style food of Mississippi.

A banker for more than 32 years, Jordan served as the president of the local Chamber of Commerce and sat on numerous community boards. He and his wife, Jane, have two daughters and four grandchildren.