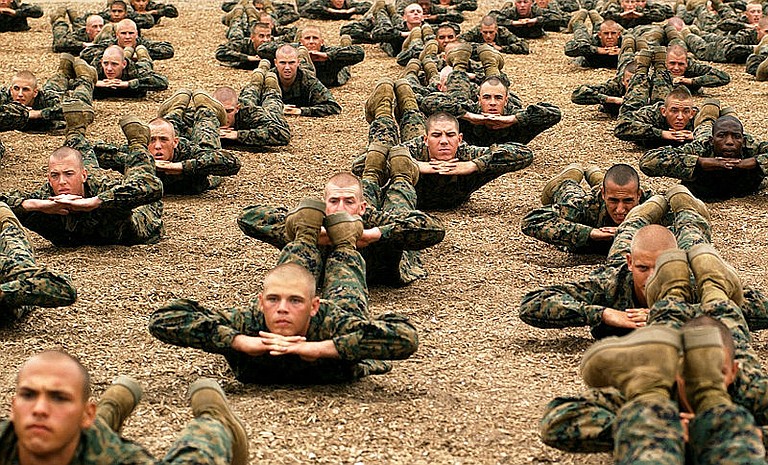 More than 250,000 service members transition out of the military every year. Each of them will soon have several helping hands to start their own businesses as they make the move back into civilian life.

The U.S. Small Business Administration and the U.S. Departments of Veterans Affairs and Defense have teamed up to launch a training program for transitioning veterans from service to entrepreneurship. The U.S. Marine Corps will pilot the nation-wide initiative, Operation Boots to Business: From Service to Startup.

At the same time, veteran-owned businesses made up a large portion of all small businesses in the country, about 9 percent. From 2005 to 2010, the entrepreneurship, or self-employed, rate of all veterans was 13.5 percent, compared to 9.9 percent of non-veterans.

"Our service men and women have made incalculable contributions and sacrifices for our country, and supporting them as they pursue their dreams to start or grow their own business is one of our highest priorities," SBA Administrator Karen Mills wrote in a press release. "Through this partnership, we stand ready with support, entrepreneurial training, and resources that are critical tools to help them start businesses, drive economic growth and create jobs for themselves and their communities."

The program will pilot at four locations: Quantico, Va., Cherry Point, N.C., Camp Pendleton, Calif., and Twenty-Nine Palms, Calif. The program will expand across the country during the 2013 fiscal year.

President Barack Obama kickstarted the initiative in 2010, when he called for the creation of two joint task forces; the DOD-VA Employment Initiative Task Force and the Interagency Task Force on Veterans Small Business Development, led by SBA. Both task forces worked together to create Operation Boots to Business: From Service to Startup.

Stuff the Bus to Provide School Supplies Some Jackson-area families will get help this year with the financial burden of school supplies that inevitably rolls around every August.

WLBT and the United Way of Jackson are partnering with Office Depot, Raising Cane's and other local businesses in an effort to collect school supplies and donations to benefit families in need.

Donators can drop off items at participating vendor locations. On Wednesday, July 25 from 5:30 a.m. to 6:00 p.m., the public can help stuff the big, yellow school bus parked in front of Office Depot on Interstate 55 North Frontage Road with school supplies.

For more information about the Stuff The Bus campaign, call Renae Wright, project coordinator, at 601-960-4493 or email her at [email protected]

Businesses Invited to Expo in Mexico

The Mississippi Development Authority is inviting state business leaders to participate in a building, construction and home improvement expo in Guadalajara, Mexico Sept. 6 through 8.

MDA said the expo will allow leaders looking to expand business into Mexico and Latin America to make one-on-one connections and build business relationships with business people and qualified buyers. The expo attracts more than 80,000 people every year, MDA wrote in a press release.

"In 2011, U.S. businesses exported $197 billion in goods and services to Mexico, and with the free trade agreements the U.S. has in place with several countries in Latin America, it's a great time for Mississippi businesses in the construction and home improvement industry to expand into that market," Rose Boxx, MDA's Latin America trade specialist said.

Space is limited and offered on a first-come, first-served basis. The deadline to register is Aug. 3. For more information or to obtain a registration form, contact Rose Boxx at (601) 359-3045 or e-mail [email protected] Interested parties can also visit www.mississippi.org/trade to learn more about the agency's international marketing services and events or to request a consultation with an international trade specialist.

With expansions at the Nissan plant in Canton and the General Electric factory in Batesville, the Toyota plant in Blue Springs running at full steam and the introduction of the GreenTech Automotive's MyCar, built in Horn Lake, manufacturing is surging in the state.

The JFP's R.L. Nave reported last month that Nissan will add 1,000 new jobs at their Canton plant by adding the 2013 Sentra to the factory's line. State taxpayers paid $7.5 million, or $7,500 per job, in incentive financing for infrastructure and job training for the jobs.

Meanwhile, Toyota is operating at full strength at the plant in Blue Springs. The factory officially opened in November 2011, with an unveiling of the first Corolla built in the state. The $800-million plant employs 2,000 people.

While the Japanese-owned car giants are pumping out well-established automobiles, a newcomer to the U.S. auto industry is now building electric cars in Horn Lake.

GreenTech Automotive officially unveiled its MyCar, an all-electric car built at the Desoto County factory. The two-seater has a range of up to 115 miles.

Once it is fully operational, GreenTech expects the plant to employ 426 people and support more than 7,400 more.

A short drive south on Interstate 55, GE is rolling out new technology in air travel. Workers at the Batesville plant are working with ceramic and carbon fiber materials to make parts like fan platforms, which workers will install next to the blades on GE's GEnx engines on Boeing 787 Dreamliners, the Wall Street Journal reported.

The factory is inventing the production process from scratch, since there is little manufacturing expertise in working with such materials. The first platform took factory workers three days to build. Now, the factory is pumping out 30 platforms a day.