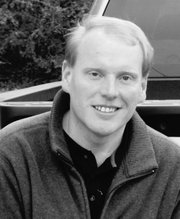 In 2008, the Mississippi ballot offered seven presidential candidates and their running mates. Along with the Republican and Democratic nominees, we had third-party candidates ranging from the Green Party to Reform Party, independents and Libertarian candidates.

I am a firm believer that everyone has the right to run for whatever office they choose and to let the voters decide. But as far as this year's presidential election is concerned, it's like a quote I heard from an old movie: "Ideas and reality are a long way apart." What I mean is that the election will come down to the Democratic nominee and the Republican nominee. The only time in recent memory that a third-party candidate made a significant showing was 1992, with Ross Perot capturing 19 percent of the vote.

With the Democratic ticket being Obama and Biden, the question is: Who will the presumptive Republican nominee, former Massachusetts Gov. Mitt Romney, choose as his running mate? In my opinion, it could well be either Florida Sen. Marco Rubio or Wisconsin Rep. Paul Ryan. Aside from the fact that these two states have large electoral votes to put Romney closer to the magic number of 270 required to win the presidency, they both bring a great deal to the ticket.

Rubio, 41, has been a rising star in the Republican Party since his election to the U.S. Senate in 2010, following his tenure as speaker of the Florida House of Representatives. Watching Rubio on "Hannity" the other night, I could see that he handles himself well with the national press. Ryan, 42, has been a congressman since 1999 and is chairman of the House Committee on the Budget. He's also a rising star in the GOP ranks. It has been a long time since the GOP carried Wisconsin; putting Ryan on the ticket could tip that state into the Romney column. Both Rubio and Ryan bring a relatively young age along with experience in public service.

Anything can happen in the next several weeks, and Romney could deliver a surprise. In 2000, George W. Bush chose Dick Cheney, who was leading Bush's vice-presidential selection process. In 1992, then-Arkansas Gov. Bill Clinton chose then-Tennessee Sen. Al Gore as his running mate, two men from adjoining southern states. In the last election, Sen. John McCain chose then-Alaska Gov. Sarah Palin, who was virtually unknown in the other 49 states.

One thing is sure: Republicans will thoroughly vet the candidates for vice president. No presidential candidate of any party wants an unexpected development—an "October surprise"—to come from their choice of a running mate. In other words, like the folks say out in the country, "They need to be as clean as a hound's tooth." At this juncture, both Rubio and Ryan fit that bill.

Ken Strachan is a former mayor of North Carrollton and serves as Carroll County coroner.