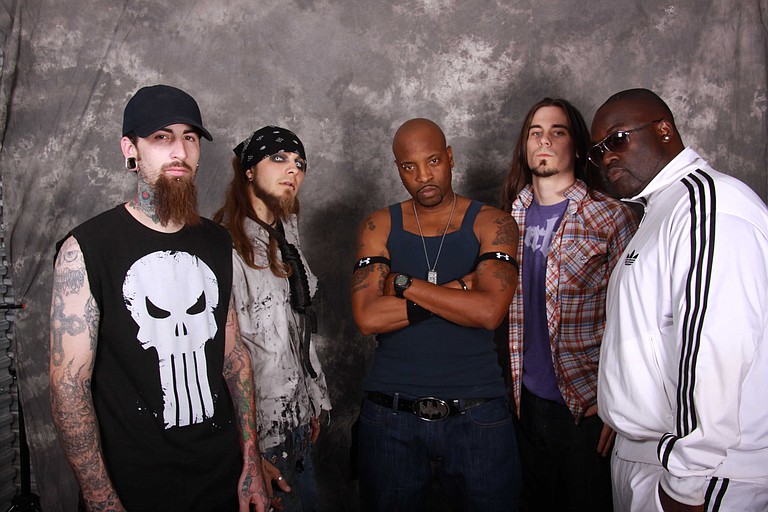 Storage 24 says it is "taking over the world of music."

Storage 24 has won JFP's Best of Jackson's Best Rock twice and Best Original Band twice already, but such labels do the band's unique and distinctive sound little justice. At first listen, Storage 24, fronted by singer Baby Phred, sounds like a typical rock band, but listen closer, and the R&B sound they infuse into their music becomes apparent.

Phred has been making this kind of music (influenced by bands like Linkin Park) for 10 years. Three years ago, Storage 24 matured into what it is today, joined by rapper Brad "Kamikaze" Franklin, lead guitarist Daniel Warren, bassist Blake Thomas and drummer Adam Williams. Storage 24 has won national awards, including Band of the Year in Dothan, Ala., and Band of the Year at Club La Vela in Panama City Beach, Fla., the largest club in the country. Phred attributes their success to their talents. "I think we were the best band in that moment," he says. "I just have confidence in Storage 24."

Currently, Storage 24 is working on a new album. It's gonna be hot as cayenne pepper," Phred says. Storage 24 LLC, their own record label, recorded the untitled album, which has 12 songs.

The album's lyrics are all about experiences the band members have been through. "I write everything that's real, whether it's bad dreams or love or hate; everything that comes out of my brain is real ... everything I write is a story of my life," Phred says. This realness is evident in "No Surrender," a journey through a haunting dream. The song has a two-part music video to accompany it that shows a man chasing after his love, who turns into a monster.

Storage 24 makes relatable and personal music, and that's exactly what Phred says he wants people to take away.

"Whatever song we're singing or performing at that time, I want you to have the same feeling I had when I wrote it," he says.

Storage 24, with its blend of rock and R&B, brings something unique to the Jackson scene in both recorded music and live shows, which Phred says are "explosive. It's a wild moment." Storage 24 exudes pure energy on stage—they jump around and demand the audience's attention, and every song they perform seems just as intense at that moment as it was when they wrote and recorded it.

Phred emphasizes the need for up-and-coming musicians to "stay focused and always appreciate your God-given talents. And never, ever, ever forget your fans. Fans are everything. I love my fans."