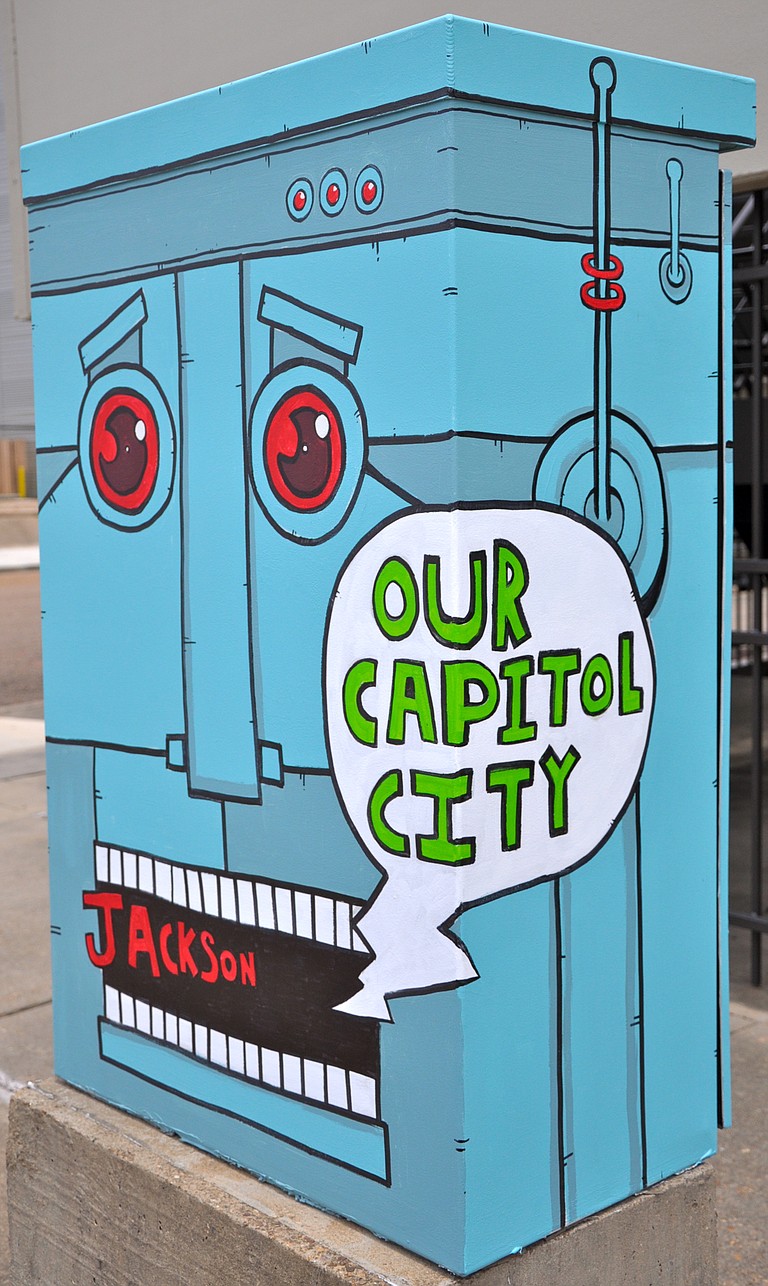 If the red light on the corner of Pascagoula and State streets catches you while you're driving northbound on State Street, look to your left. You will see that the traffic light box, what used to be a dull steel box that you probably never noticed, now displays Tony Davenport's colorful rendition of a jazz band playing in the shadows of the King Edward Hotel.

At the corner of Pearl and Congress, you see another one of these light box art works. Tom Harmon has turned this box into a bookshelf that displays the works of some of Mississippi's most celebrated authors.

These art works—18 of them have been completed and are sprinkled throughout downtown Jackson—are part of Mayor Harvey Johnson Jr.'s Public Art Initiative. Johnson got the idea when he visited Clayton, Mo., and saw light boxes being put to a productive, creative use. Janet Scott, executive director of the Greater Jackson Arts Council, says 30 traffic-light boxes, which control the signals at each intersection, will be turned into art displays by the end of the summer.

For the past few months, snatches of color have been popping up on downtown street corners, as local artists put their stamp on traffic signal boxes as part of a public art initiative launched by Mayor Harvey Johnson, Jr.

Over the next three to five years, all 300 traffic boxes in the city will become public-art works.

When Tony Davenport first heard the idea, he didn't need much convincing to take part. "As an artist, it was a good opportunity to give back and contribute to the landscape of the city," Davenport says. To get involved, he and other artists who were interested had to submit a proposal with their design idea to a deciding committee. His was among 100 or so applicants.

Davenport's box features themes that he deals with in his other paintings. "The theme of music, culture, people—those things are some of the things that you see in growing cities, cities that are progressing, cities that are embracing the creative class. So I felt like my themes work in concert with what (Jackson) is trying to do," he says.

On Thursday, June 21, the Public Art Initiative held a walk around downtown Jackson to "unveil" the new traffic-box art. It began at the corner of Lamar Street and Pascagoula Street. If you missed it, no need to worry—use our map to host an art walk of your own.

"I may spend days or weeks mulling over an image in my head before I get to the point I'm ready to sketch it. In relation to the traffic-signal-box art, the theme was centered around Jackson's culture. The first thought was music, then recreation, great landscapes and finally, uniqueness. My idea was to merge the individual elements and concepts together abstractly in relation to uniqueness. Hills are in the shape of a guitar. The bell of a trumpet and saxophone are one. All of this was drawn very roughly at first. After a better sketch of the image, and a couple of adjustments (to make it work on a three-dimensional object), I was ready to add color with paint. I used bold and bright colors for further interpretation of Jackson. The art eventually became what I visualized in my mind. You are finished when you, the artist, accept it."

To view close-up shots of the traffic boxes, check the link here.