Arthropod of the Day 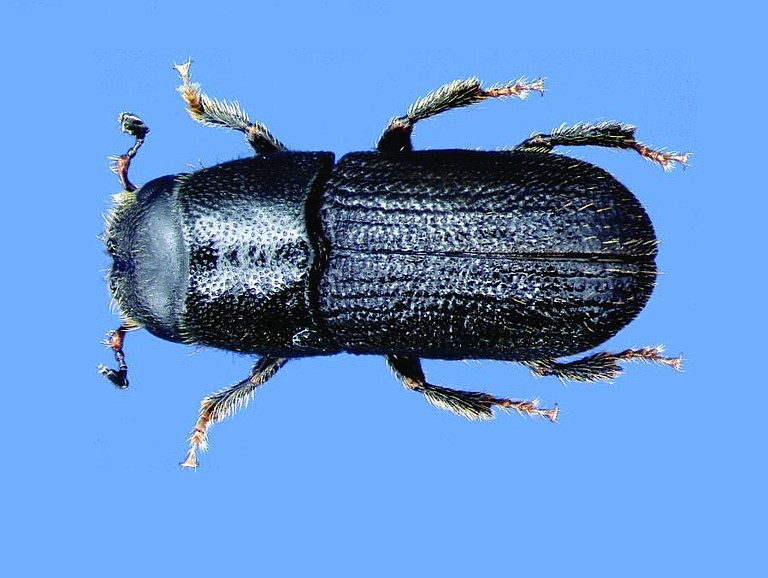 Beetles are invading Mississippi. No, not the mop-topped British pop band, but the southern pine beetle. And these beetles don't want to hold your hand; they want to eat your trees.

The Mississippi Forestry Commission reports an insurgence of the invasive insects that bore into live pines, eventually killing the trees, for the first time since 1996.

The U.S. Forest Service in the Homochitto National Forest documented 250 cases of active pine-beetle infestations, according to The (McComb) Enterprise-Journal in May and June. This has prompted forest officials in the southwest Mississippi counties of Franklin, Amite, Wilkinson, Adams, Jefferson, Lincoln and Copiah to urge property owners to inspect their land for the presence of the pests.

The southern pine beetle (Dendroctonus frontalis) is the South's most destructive insect. Preferring loblolly, shortleaf, Virginia, pond and pitch pine tree species, the beetle generally attacks trees greater than 6 inches in diameter that have been weakened by floods, droughts and windstorms.

The most obvious sign of an infestation is browning of needles with the trunk typically revealing white, yellow or red-brown pitch tubes and wad-of-gum-sized masses of resin.

The beetles are a concern because the trees they kill can fall over and injure people and could fuel forest fires, not to mention the beetles' potential devastation of natural pine forests and tree farms. The forest service division of the U.S. Department of Agriculture calls the southern pine beetle the "most economically important forest pest in the southern United States." In recent years, beetle outbreaks have resulted in $1.5 billion worth of damage, the USDA reports.