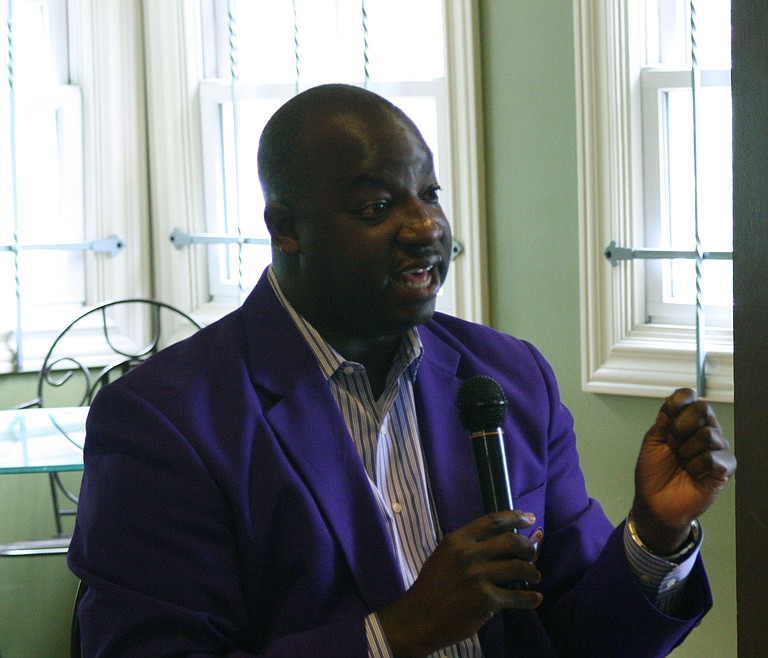 Alcorn State University President Christopher Brown said the Jackson Convention and Visitors Bureau will need to offer $500,000 cash, plus expenses, to get the university to consider playing home games against Jackson State University in Jackson. Photo by Jacob Fuller.

Alcorn State University President Christopher Brown and interim Athletics Director Dwayne White announced this week that the school will exercise its right to hold the Nov. 17 football game against arch-rival JSU in its home stadium.

The announcement comes as a blow to Jackson. The Capital City Classic has averaged an attendance of more than 32,600 since 2002, making it the city's most-attended annual sporting event. The average yearly economic impact to the city in recent years is more than $2.5 million.

The attendance numbers differ quite a bit, though, depending on who you ask, Brown said this morning at Koinonia Coffee House's Friday Forum. The city claimed more than 30,000 people attended the game last year. Meanwhile, the state Department of Finance and Administration's numbers showed 28,762 in paid parking and about 22,300 people actually walked through the turnstiles at Veterans Memorial Stadium.

Brown told the JFP that the Department of Finance and Administration obtained their figures based on entertainment taxes on tickets. "So if it is true that there were 35,000, then the city of Jackson owes the state of Mississippi 7 percent on 10,000 people," Brown said.

Mayor Harvey Johnson Jr. said in a press release that the city and the Jackson Convention and Visitors Bureau worked with both universities in an attempt to keep the game in Jackson. He said the JCVB offered to pay Alcorn State for transportation, lodging and meals for the football team, athletic staff, cheerleaders, band and student representatives. They also offered to pay for the university's pep rally, coaches' media luncheon, Classic Golf Tournament, university president's reception and a step show. Altogether, JCVB committed approximately $160,000 to Alcorn to keep the game in the capital city.

"I recognize the substantial economic impact the Classic has on the City of Jackson," Johnson wrote in the press release. "Just last year, according to the Jackson Convention and Visitors Bureau some 31,500 people attended the Classic, and it had a $2.5 million economic impact."

Brown said the Convention and Visitors Bureau would have to offer much more than that to get Alcorn State to hold their home games in Jackson. With Jackson making $2.5-$3 million off the game, he said both universities should get a larger portion of the profits.

"There is no way they would invite any SEC school or ACC school into this city and offer them what they offered these two SWAC schools," Brown said.

Wanda Wilson, President and CEO of the Visitors and Convention Bureau, said at Friday Forum that she thought the $160,000 proposal was the starting point of a negotiation.

Brown said his commitment is to Alcorn State and Lorman, where he lives and works. He said it is not fair for him to rob Alcorn State's 4,000 students of the on-campus rivalry experience that other students get to enjoy.

"If you come to the table with $500,000 cash and expenses, then we'll have to begin our conversation. That's for both schools," Brown said to Wilson about negotiating in future years.

The annual game between the schools has not been played at Alcorn State since 1992. The game in 1993 was called The Turkey Bowl Classic. Jackson State has a record of 13-6 in the 19-year streak of games in Jackson.

I do get Alcorn's point, but would they really make more money playing it down there? We'll see.

I just do not get it. I am HBCU alum and a PWC alum, and a football fan. The argument Alcorn is making assumes that the appeal and scope of the HBCU games/classics is the same as an SEC or ACC game. It is not. I am not saying that there is a difference of import to the respective schools, but the appeal, what makes them marketable and interesting are quite different. HBCU football is about the experience, the appeal of SEC football is about the football, played by future pros. While Alcorn is well within its right to market its program like it has the appeal of an SEC school, I think that would be a little short sighted. While they should demand more revenue from the classic, there can be an argument that they could make more revenue if the game is in Lorman. The Classic could be sponsored and promoted better, but no way should we assume that this should be about a "rivalry home game experience" for Alcorn students.

HBCU football games/classics are about tailgating, concerts, pep rallies, step shows, and the half time battle of the bands, at least for I'd say about 80% of the people who go to these events. There are some hardcore JSU/ASU football fans, but they do not generate the millions of dollars surrounding this game. perhaps I am too foreign to SWAC culture, but there is no way that a school like Alcorn should think that holding a game in Lorman, MS is more lucrative than holding a game in Jackson.

SEC football, Class AA baseball, minor-league hockey, the JSU-Alcorn game ... the City of Jackson loses again and has no one to blame but itself (although a major assist goes to the historically mismanaged Memorial Stadium.

Doc, isn't it early on a Friday for you to be drinkin-- oh wait, nevermind.

Seems like there are some mitigating circumstances to the above, like the SEC teams getting their own stadiums (and, eventually, even those villages where the schools are located have started to look like towns), the State disallowing beer sales at the minor-league hockey games... and the AA team, well, you're right there, that's probably on the City, at least for not trying harder. (Although that cow pasture in Pearl was probably pretty attractive for building something ground-up, I'd guess.)

JSU-Alcorn... that one just works in Jackson -- as blackwatch suggests, I think all of the area around the stadium for tailgating is much more important than the venue itself -- so I'm not sure who you're blaming in the city... except maybe whoever decided to play hardball with Alcorn's revenue share.

It'll be interesting to see if anyone blinks next time around.

I'm being honest when I say this, but I'm glad that they're going back to the reservation, lol!!!!

I hate the years we're supposed to sit on the vistitors side! lol

Its selfish of me, but I'm being honest

No worries Southern will be in town this year. That should make up for the loss.