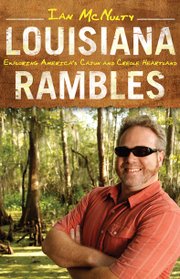 Here's your plan for today: Grab the intriguingly thick paperback book "Louisiana Rambles: Exploring America's Cajun and Creole Heartland" by Ian McNulty (University Press of Mississippi, 2011, $22). Read, get your auto serviced, then hop in the car and put in more than a few miles following McNulty's travels through south Louisiana, "where the state's defining Cajun and Creole cultures developed and thrive still." I liked every single word in this book enough to dream of flying into the Crescent City from Portland, Ore., renting a car and heading out. I can't afford that, but reading all 23 chapters, plus the appendix, took me right there.

In the introduction, you learn that your guide grew up in Rhode Island, fell captive to the lure of New Orleans—a foreign place that "seemed like the antidote for the normality of home." He moved there at age 25, and later fell in love with and married Antonia, a vegetarian New Orleans native. McNulty writes that before Katrina in 2005, "I had only the sketchiest idea of what made up south Louisiana between the highways. It was as if I lived in Vatican City but couldn't find my way around Rome."

What McNulty witnessed on his chosen evacuation route along the River Road, "that thin, paved trickle paralleling the levee and leading upriver," distracted him somewhat from his worry about what Katrina could do to New Orleans, exposing him to "landmark antebellum plantation houses and tiny, tin-roof cottages, little roadside barrooms and restaurants, modern refinery complexes, and one small, old Louisiana town after the next."

After Katrina, he vowed to explore whatever remained, but McNulty was forced to wait out the cleanup, several more hurricanes and the Deep Horizons spill in the Gulf before the journey could come to fruition.

I fell completely in love with McNulty's writing style, at once as familiar as conversation with a trusted friend, yet vivid and intriguing—McNulty is a man compelled to share the details and ideas of the culture, music, food and people gloriously heaped upon him by his explorations. The man's metaphors rule; they're so perfect they made me grin time after time.

McNulty writes about south Louisiana, from around Opelousas down to the mouth of the Mississippi River, across the bayous of southeast Louisiana and the Cajun prairie west toward Texas. Finally, as a responsible travel writer who deeply loves where he lives and travels, McNulty includes a subtle call to arms about a Louisiana situation that impacts each of us, "the equivalent of one football field worth of American soil ceded to the Gulf every thirty-eight minutes."