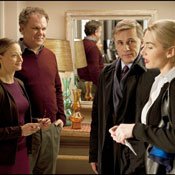 Two sets of parents attempt to resolve an altercation between their sons in "Carnage."

"Carnage," based on the Tony award-winning play "God of Carnage" ("Le Dieu du Carnage") by French dramatist Yasmina Rez, explores civility, savagery and vomiting on art books. The movie opens without drama on a long, static shot of a local park where a group of 11-year-old boys are playing. One boy says something (which we can't hear) to another, and the other boy lashes out at him with a stick. It's an ordinary stick, one you could find in any park, and the childish act is nothing extraordinary. It has occurred countless times in countless parks around the world.

The boys' parents—Penelope and Michael Longstreet (Jodie Foster and John C. Reilly) and Nancy and Alan Cowan (Kate Winslet and Christoph Waltz)—meet to discuss the situation. Penelope (aka Darjeeling, a pet name from a honeymoon in India) requested the reconciliation session. The Longstreets' son, Ethan (Eliot Berger), lost a tooth and may lose another, but they won't know for sure until he is grown up.

Like a good, responsible parent, Nancy bleats a series of apologies for the actions of her son, Zachary (Elvis Polanski). Her husband, Alan, chimes in now and then, but he wears a snide smile of amusement. He's a lawyer, and nothing gets past his bull-crap detector. He knows that the Longstreets are not as noble as they present themselves to be, and he jibs and jabs at them at opportune moments. As the day wears on, these middle-class parents peel off the gloves of civility and throw verbal knuckle blows at each other. The film's ending is clever, but the vomit on Penelope's beloved art books is the icing on the proverbial cake.

Roman Polanski ("Repulsion," "Rosemary's Baby," "Chinatown," "Tess," "The Pianist" and "Death and the Maiden") directs this decadently arrogant, but absurdly funny satire on parenting. In fact, the movie is a family affair. Polanski's son, Elvis, plays Zachary, the boy with the stick, and Polanski himself peeks in as the voyeur neighbor.

As director, Polanski treats the material with patience. He doesn't rush, letting it flow with seeming spontaneity. The result is a fluid invitation into a verbal slaughter.

Quite rightly, given the nature of the material, the camera and editing take a back seat to the acting. The actors control the momentum, and dialogue creates the drama. Foster, Reilly, Winslet and Waltz, all of whom are spectacular in this movie, find some inner reality to make their characters more than stick-figure representations in a discourse comparing civility to savagery. These actors walk within the space of a thin purple line, where red for emotion and blue for technical skill converge. (I learned this purple-line theory from my son, who attended the Yale Acting Conservatory, but I have never seen the theory more evident and adeptly done than in this film.)

Every character spontaneously shifts in tone and energy, and, when they combine, the movie is a masterful symphony of human emotion, desire and satire. No one actor steals the show. Rather, they move in and out of focus. For instance, Penelope and Michael serve the Cowans a cobbler. Penelope gushes about her clever recipe, combining pears and apples. Alan eats heaps of the cobbler, but it is Nancy who vomits on the precious art books in the living room. The scene, like the movie, is give and take. Perspective gets lost, truth is acknowledged ("life with mediocrity"), cover up begins and alliances shift and change, until everything is blown out of proportion and your guts hurt from laughing so hard.

"Carnage" is a delightful war of words, a brutal carnage of civility and one of the funniest films I have seen in ages.

Great review. And thanks for sharing the tidbit of film theory learned at Yale by your son! Sara Anderson