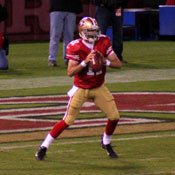 San Francisco 49ers quarterback Alex Smith is finally living up to his draft-pick status this year. The 49ers beat the Saints Saturday, barely.

One reason I love sports is that the stories tend to write themselves. As the NFL Playoffs begin to reach the final three games, the storylines jump out of the TV screens at me.

The divisional round of the playoffs gave us two surprises in the NFC side of the house. Before the game, few people gave the San Francisco 49ers a chance against the New Orleans Saints. But in a wild finish, the 49ers stunned the Saints 36-32 as the teams traded scores in the final five minutes.

New Orleans did everything wrong in the first half of the game, turning the ball over and missing out on points. But they kept the game close.

The Saints finally took the lead at 24-23 with a little over four minutes left to play. San Francisco struck back to retake the lead 29-24 before the two-minute warning.

New Orleans and Drew Brees marched right back down the field to lead 32-29. With slightly more than a minute and half to go, Alex Smith led the 49ers on a last-second game-winning drive.

Anyone who follows NFL football knows the storyline in San Francisco is redemption. Smith was the first pick of the 2005 NFL draft and, until this season, never lived up to being such a high pick. Smith will face a New York Giants team trying to repeat history.

New York went to Green Bay and punched the defending Super Bowl Champion Packers in the mouth. The Giants pulled off the upset with a swarming defense that forced four Packers' turnovers and Eli Manning dropping passes in receivers' hands all over the field. Manning is, without question, an elite NFL quarterback.

The Giants are repeating a run they made in 2007-08 that ended with New York upsetting the undefeated New England Patriots in the Super Bowl. The parallels this year to that magic Giants' Super Bowl run are nearly identical.

Meanwhile, favorites took care of business in the AFC. New England looked unstoppable against the Denver Broncos. Before halftime, the Patriots took a big lead, and they cruised to a 45-10 win over the Broncos. Tom Brady reminded the nation that he was the original elite quarterback before Manning, Brees or Aaron Rodgers.

Brady and Patriots coach Bill Belichick are looking for their fourth Super Bowl win together. Another win would put these two men on a level few have reached.

The New England Patriots will host the Baltimore Ravens in the AFC Championship Game.

Baltimore used a superb defensive effort to offset a lackluster offensive effort to defeat the Houston Texans 20-13. Houston played their third-string quarterback after injuries knocked out their other two. In the end, rookie TJ Yates couldn't overcome a rookie's mistakes. The Ravens forced four turnovers that included three interceptions on passes Yates threw.

Back in the 2000-01 season, Baltimore's defense led the Ravens to a Super Bowl victory over the New York Giants. Two key members of that defense, Ray Lewis and Ed Reed, are looking to lock up their legacy with another Super Bowl ring.

New England and Baltimore are both trying to add to their legacy. While Brady and Belichick are one ring away from becoming one of the best coaches and quarterbacks in NFL history, the Ravens are looking to supplant the 1985 Chicago Bears as the best defense ever. That great Bears defense only won one Super Bowl, while the core of this great Baltimore defense would have two rings.

My early thoughts are that New England will beat Baltimore. The Patriots offense has been nearly unstoppable since mid-November. Only one team (Miami Dolphins) has held New England to fewer than 30 points since then. The Ravens, meanwhile, struggled to defeat a third quarterback at home by seven points.

I am torn on who will win between the Giants and 49ers. I could easily talk myself into taking either team. San Francisco is at home but New York has never lost an NFC Championship game (4-0).

It's early, but I will give the nod to the Giants as the only road team to win a playoff game this year. I am solid on New England but reserve the right to change my mind about New York.

What surprise? Didn't I tell you slow Saints' fan the team wasn't going anywhere near the Super Bowl again. You Saints fan got happy and thought you had beat Frisco yet they came back within seconds and beat y'all. This was all expected in my world. The secret and surprise of the season was that ill-equipped quarterback in Denver lining up with a miracle and beating the Steelers. Reports are coming out of Pittsburgh that Ike Taylor is boared up in his house and afraid to leave. He's getting death threats! I know I went out there looking for him to no avail. I was just going to talk to him about retirement or demanding a trade. Just like Tebow's pass he missed me too.