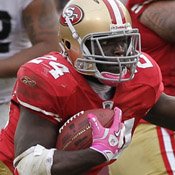 A large portion of Mississippi will root for the New Orleans Saints this Saturday. Certainly, the residents of the capital city will hope that Drew Brees and company win the franchise first road playoff game.

That first road playoff win must come against former division rival the San Francisco 49ers. New Orleans has never met the 49ers in the playoffs.

A Mississippian could potentially stand in the Saints' way. Former Terry High School star Anthony Dixon was drafted by the 49ers in the sixth round of the 2010 NFL Draft.

San Francisco selected Dixon with 173rd overall pick out of Mississippi State. Before Dixon was a Bulldog, he was a highly coveted player in high school.

As a senior at Terry High School, Dixon garnered nearly every accolade and award a football player from the Jackson Metro Area can receive. Rated as the 22nd running back out of high school in the nation by Rivals.com, Dixon was selected to play in the Mississippi/Alabama High School All-Star Game.

Dixon chose Mississippi State over several outstanding universities. At MSU, he would play his freshman season in all 12 games and start in five games.

His stellar college career would end with him leading the Bulldogs in rushing all four years. Dixon was just the seventh player in SEC history to lead his team in rushing for four straight seasons.

By the time his career ended, Dixon would become the Bulldogs all-time leading rusher. His final career numbers were 3,994 yards with 42 touchdowns.

Dixon has not seen a ton of action in his two years at San Francisco. He has rushed for 324 yards on 99 carries with four touchdowns.

New Orleans and Dixon also have an interesting connection. His first NFL touchdown came on his first carry on Monday Night Football against the Saints.

Dixon and the 49ers would fall to the Saints 25-22 at home. Terrell Owens was the last San Francisco player to score on his first NFL carry.

Along with defensive tackle Will Tufuafu, Dixon received the 2010 Thomas Herrion Award. The award is given to a first-year player or rookie who has taken advantage of opportunities to help make their dreams come true.

This season, Dixon has rushed for 87 yards on 29 carries with two touchdowns. He has also caught one pass for six yards and added seven tackles on special teams.

Dixon has played in all 32 games during his two years at San Francisco.

I'm a Dixon fan... it'll be a shame how vociferously and objectionably I will be forced to root again him on Saturday, but I was very pleased to see him in the NFL and excelling... at least up until the 49ners season ends this weekend.

I noticed on twitter a ton of people asking about Patrick Willis. One simple reason is that Willis is not from the Jackson area. Willis played his high school football in Tennessee. He came to Ole Miss out of high school. Except for playing for the Bears he has no connection to this area. Dixon on the other hand is a local guy who has made good. If he gets a chance to run the ball, I hope he does well. He also contributes on special teams.