Marathon for the Blues 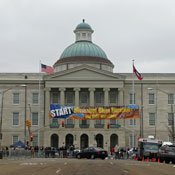 The 2012 Mississippi Blues Marathon begins and ends in front of the Old Capitol Museum at State and Capitol streets downtown.

Mississippi is often characterized as a state fraught with racial turmoil and economic and educational issues. From the pain and strife of the Magnolia State's past, however, has risen some of the most soul-stirring and original music the country can claim: the blues.

Popularized and "plugged in" in other cities—notably Chicago, Ill., Memphis, Tenn., and other music hotbeds of the mid-20th century—the one-man, one-guitar style of the Delta blues is what started it all. The music has influencing a jaw-dropping list of popular musicians from George Gershwin to ZZ Top. The blues is Mississippi's baby, offspring that we need to nurture and celebrate as one of the state's great offerings and remembered even as the genre's pioneers pass away.

The Mississippi Blues Marathon is just one of the ways that the state pays tribute to the blues. Presented by Blue Cross and Blue Shield of Mississippi, the marathon is Mississippi's only full marathon. It begins in downtown Jackson before cutting a scenic route through central and northeast neighborhoods. Like the blues, the marathon is something Mississippians can be proud of, an event that pays homage to one of the state's treasures. It also creates an opportunity for music, fun, and fellowship for runners and non-runners alike.

But how did the blues and the historic image of the bluesman—generally characterized by long nights, whiskey and dark, smoky juke joints—get paired with a 26-mile race?

"We explored some different options to connect wellness and the nature of the event to the blues," race director John Noblin said.

The marathon raises money for the Mississippi Blues Commission, but Noblin, wanting to find a way to "make our money matter," learned of the commission's benevolent fund, which assists aging musicians with health-related costs.

"This tied the wellness component that Blue Cross and Blue Shield of Mississippi promotes with the blues," he said.

The marathon serves to promote the blues within the state, particularly to younger generations. But despite the fact that many Mississippians have been immersed in blues music and culture, Noblin said that there is a "much greater appreciation for the blues outside of the state."

On the two days prior to the race, Jan. 5 and 6 , the 2012 Blues Expo takes place at the Jackson Convention Complex. The expo features area vendors, food and a chance to meet everyone involved with the race.

Expect a street party atmosphere on race day, Jan. 7. Several checkpoints along the route will have live music, including noted local blues musicians such as Scott Albert Johnson and Sherman Lee Dillon, along with area up-and-comers. (Look for the full schedule of musicians, times and locations on jfpsports.com).

The weekend will culminate in the Blues Crawl Saturday night. Downtown bars and restaurants have joined to offer a shared cover charge of $10 to visit every venue, with plenty more music to be found in the surrounding downtown scene.

The marathon course is a representative slice of north Jackson. It begins at the corner of Capitol and State streets downtown, moves north on Old Canton and Meadowbrook roads, curves south at Briarwood Drive, meanders through the Eastover neighborhood and skirts the Jackson State University campus before finishing back downtown.

Races start at 7 a.m. on Saturday, Jan. 7. Expect to see runners from at least 45 states and nine countries. The schedule includes a full marathon, half-marathon and a marathon relay. The kids' 1-mile fun "marathon" starts at 8 a.m. For registration, course maps and more information, visit msbluesmarathon.com. For those not competing, volunteer opportunities abound. Email Erin Mitchell at [e-mail missing] for volunteer info.

The 2012 Blues Crawl
The final event of the Mississippi Blues Marathon weekend is the Blues Crawl. Marathon participants receive a wristband that will get them in all of the venues at no charge from 7 p.m. until midnight Saturday, Jan. 7. Supporters, family and friends of marathoners can purchase a wristband for $10 at the 2012 Blues Expo or at any participating venue.