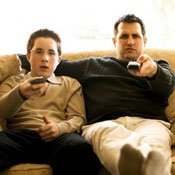 The Cable Company and I have been fighting. Until recently, they've been winning. There was a brief stint where I dealt them a heavy blow when I opted for Internet via AT&T and went to satellite television. (Take that, Cable Company!)

Sadly, when my family moved to Florence, we could not get AT&T. The local phone company offers something with speeds a trot faster than dial-up—which is still faster than what those satellite guys can give you. Enter the Cable Company once more with its super-fast Internet that I love and its horrendous cable options that I despise.

The wife and I watch more TV than we like to admit, but we're still not huge TV watchers. In fact, we watch only a few shows. Our media setup is no slouch, though. I've hacked a bit, here and there, to piece together a system to make us the least dependent on the Cable Company as possible.

My latest run-in with the Cable Company got me thinking of how I can give them the boot—at least for TV—while at the same time enjoying their extremely nice Internet speeds. In doing so, I had to design a system that follows a few rules:

Here's how I did it. The key components, besides the obvious Tvs, are:


Apple TV ($99) allows you access to Netflix and the iTunes store. Movie rentals are $4 each, but you can always rent movies for less using Redbox. For a season of TV shows, the average cost is around $35. At $35 per season, we could buy up to 24 seasons for the same cost as our old annual cable bill. Thankfully, we don't watch 24 seasons worth of shows.

(Note: Not all shows are offered via iTunes, but most are.)

The Mac Mini ($600 new or around $200 used) allows me access to the Hulu Desktop app and a Web browser. At first, I thought this would be too complicated for the family, but it really isn't. You can control it using the Rowmote Pro app ($5) for the iPhone or iPad. My wife took to it quickly, and she's not a technologically advanced user. You could use any PC or Mac device, but I prefer the Mac Mini because of the small size. Likewise, remote apps exist for other smart phones, including Android-based phones.

In the office, we use an Xbox 360 ($150) as a DVD player and to access Netflix and Hulu Plus. Those two online subscription services are $8 and $6 a month, respectively. Netflix is great for children's programs, movies and even older TV shows, which my wife and I watch regularly. Hulu Plus gives us access to a large number of current TV shows that air on NBC, ABC, FOX and CW. Sadly, CBS is not included. That, along with watching most cable series, is where the iTunes store is important. (We buy seasons of "Big Bang Theory," "How I Met Your Mother," "Walking Dead," "Blue Bloods" and "Criminal Minds" via iTunes.)

Sports gets tricky. With the Xbox, you can get a lot of your sports if you are an Xbox LIVE Gold member ($60 per year). You can also subscribe to NBA, NHL and MLB packages via Apple TV. And with a Mac Mini, you can get online access for NFL and college football.

In all, our setup costs approximately $50 a month. We had no upfront costs, but setting up a similar system from scratch would run in the neighborhood of $500, which averages just $40 a month for the first year.

Of course, this setup is not without drawbacks. The obvious one is that it's a little more complicated than just using one service, but I must say it's not that complicated once you get it set up. It's really no different than switching from the TV input to the DVD input and picking up another remote, which in some cases is your smart phone.

It can require a bit of up-front money if you don't have some of the equipment already. But in the long run, it will be cheaper for us.

Finally, you may want some content you can't get. That's going to come down to a decision based on each individual's preferences.

Overall, this setup works well for us. The minor inconveniences are offset by the pleasure I get in knowing I'm one step closer to finally being completely rid of the Cable Company.