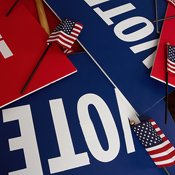 Congressional hopefuls and contenders for the Oval Office are hoping for a decisive victory in Mississippi's primary elections today.

Kenneth Stokes, who was the Ward 3 councilman for 23 years, stepped down after voters elected him as a Hinds County supervisor last fall. To fill his council spot, the city is holding a special election Feb. 14. His wife, Larita Cooper-Stokes, is a candidate for the Ward 3 spot; however, she didn't attend the candidate forum. Neither did the Rev. John Taylor Jr., another one of the 11 candidates.

None of the candidates criticized Stokes or his work on the council, except to make indirect comments about attending all meetings and building consensus with other council members.

Dorothy Stewart, founder of forum sponsor Women for Progress, got tired of the repeated messages Tuesday night. After an hour of listening to candidates respond in one-minute and 30-second sound bites to questions from a panel of journalists and from audience members, Stewart took the microphone and told the candidates she was disappointed. She said she was looking for bold statements about change.

"I have not heard anything different," Stewart said. Each candidate got a 30-second opportunity to be bold for her. One by one, they responded.

Darla Palmer, a criminal attorney, said Ward 3 had a lack of unity. Albert Wilson, the casually dressed founder of Genesis and Light Center, a non-profit organization that helps at-risk youth, said it's not about how you dress, it's about rolling up your sleeves. Patricia Williams, a minister in training, said she would listen to everyone and make connections.

"I will fix Ward 3," former educator Joyce Jackson said. "The ward didn't just get like this overnight." She is a funeral home director and a member of the city's planning commission.

Being bold, Harrison Michael II said, was about being a man of character, being honest, having integrity and persevering. Michael, like Albert Wilson, ran for the position in 2009.

Beneta Burt said it was about having a whole new way of thinking to go after what the ward needs in different ways. As an example, she cited the $5 million in grants she got for the community through the Mississippi Roadmap to Health Equity.

Zachery Williams stressed his business experience, his desire to reduce crime and a need for equal representation of all Ward 3 residents. Gwendolyn Ward Osborne-Chapman said she wanted to see unification. Earlier in the forum, she often mentioned the importance of family, tradition and respect.

"I'd like to see the community be healthy," Sameerah Muhammad, a restaurant owner, said. "I'd like be able to look at liquor licenses."

Stewart listened to the responses, shaking her head at points. She came back to the microphone to tell the candidates she still wasn't hearing what she needed. This time, she asked about what they would do about education. Since there wasn't enough time for each candidate to respond, moderator Cain allowed four candidates--the first four who spoke up--to respond.

Michael, Burt, Wilson and Jackson grabbed the chance. Michael said that as a JPS teacher, he would not be able to vote on a new school superintendent or school board members, but he could advise the council on what is needed. Wilson said money resolves a lot of ills.

"It's vitally important to have the right superintendent over our school system," Burt said.

Jackson said truancy was a problem. "I will see laws are enforced," she said. During the evening, she mentioned to the audience a couple of times that "I taught your children."