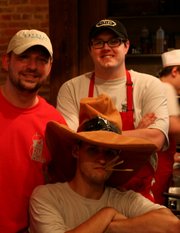 Last Thursday, four chefs gathered to pit their culinary skills against one another in the annual fundraiser Clash in the Kitchen, benefitting the Mississippi Burn Foundation. The competitors were Tom Ramsey of Underground 119, Nick Wallace of The King Edward Hotel,

Jesse Houston of Parlor Market and a surprise guest, Chef David Crews from the Delta. Each chef had 45 minutes to create three dishes using the surprise ingredient: muscadines.

While Wallace won the people's choice award, Jesse Houston was the overall winner of the night. He shared his plan of attack for the challenge.

"My approach to the secret ingredient was to use the muscadine in as many ways as possible, so that you got an overwhelming sense of muscadine, but in a completely new way. I also played with the grape theme by using grape tomatoes, freeze-dried grapes and grape seed oil and saba (syrup from grapes). The muscadine products I sourced locally and from the South were: