Where Voter ID Stands in Mississippi 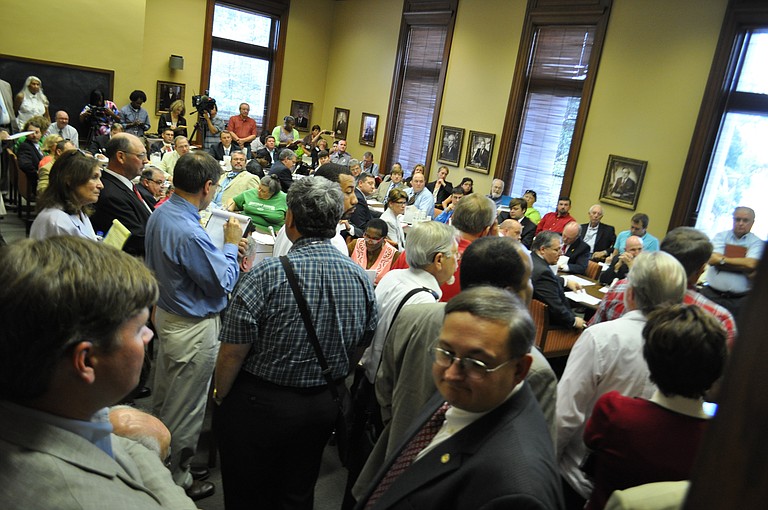 The Mississippi House Judiciary B Committee held a meeting on immigration yesterday at the state capital. Photo by Trip Burns. 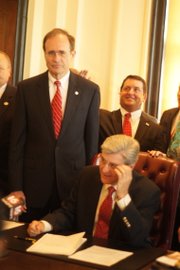 Mississippi Secretary of State Delbert Hosemann has been adamant that every voter who needs a voter-ID card will be able to get one.

After years of unsuccessfully trying to get the Mississippi Legislature to pass a voter ID law, last November, state conservatives put the issue of voter ID to the state's voters. In the same election where voters said "no" to a controversial initiative to make a fetus a person, voters said "yes" to forcing voters to present a government-issued identification card to cast a ballot. The initiative passed with 62 percent of the vote.

Of course, that wasn't the end of the issue for Mississippi. First, the state Legislature had to pass a law, which it did. Before implementing any laws that change voting procedures, Mississippi has to get a ruling on the law from the U.S. Department of Justice. That isn't a frivolous request; the state has a history of black voter suppression going back to Reconstruction and the Jim Crow era. Essentially, because it wouldn't give a fair and level playing field to African Americans then, the federal government is watching us to make sure we do now.

By June 20, however, the Justice Department had not received all the pertinent information it needed to make its ruling. Among the items missing were Secretary of State Delbert Hosemann's specific procedures to implement voter ID across the state.

A related problem, but not at issue with the DOJ, is the cost of implementing the measure. The state Legislature had failed to fund the law, which the Mississippi Legislative Budget Office estimated could cost the state up to $1.5 million in lost revenue. Sen. Joey Fillingane, R-Sumrall, the law's sponsor, disputed that figure, saying it would cost about $100,000 to give everyone who needed it a free voter ID card.

"Of course, that wouldn't happen," Fillingane said, meaning that not everyone who needs a card will actually go to get one.

Regardless of how much or how little it costs, opponents of the law doubt if it's money well-spent, or even necessary, to "fix" a voter-fraud problem that conservatives have little evidence even exists.

In early July, the Jackson Free Press broke the news about Mississippi's voter "catch 22." Under the state's new law, one of the requirements to get a free voter ID card is a birth certificate, but to receive a certified copy of your birth certificate in Mississippi, you must have a photo ID.

Then, on July 17, the Brennan Center for Justice at New York University Law School, a non-partisan public-policy legal institute, released a report, "The Challenge of Obtaining Voter ID," warning that an estimated 48,329 Mississippians do not have access to a vehicle and live more than 10 miles from a state ID issuing office.

In the rural areas of Mississippi, Alabama and Georgia—what the Brennan Center called the "black belt" due to its many black residents—many African American voters live a "significant distance" from voter ID offices. In addition, 13 "contiguous" counties in Mississippi have driver's license offices open only on a part-time basis, a fact the JFP has confirmed. The Brennan Center found that county offices in Mississippi will provide IDs to citizens; however, because the U.S. Department of Justice has not cleared the voter ID law for this state, no information on how county offices will handle ID distribution was available.

At the time, Derrick Johnson, president of the Mississippi chapter of the NAACP, said the state's voter ID law would not get approval in time for the November elections.

"The secretary of state's office is deceiving the public when they present the idea that there will be a voter ID requirement in November, when the Department of Justice has not approved it, yet," he said.

The Brennan report also identified numerous other potential barriers for potential voters. For low- and fixed-income citizens, the cost of obtaining a birth certificate, $15 in Mississippi, can be a real issue. In addition, if a person has changed her name—likely to affect married women—she will need to present proof of the name change, such as a certified copy of a marriage license.

"Only 48 percent of voting-age American women who have ready access to their birth certificate have their current name on it," the report stated, adding, "Citizens born or married in another state may incur additional charges."

Bear Atwood, legal director for the Mississippi ACLU, expressed her concerns about the laws.

"The voter ID law has two effects: One, it would disenfranchise certain voters in the state because there are so many people who cannot get access to photo IDs," she said. "And two, it would make people afraid to go out and vote because they would not have the required identification to vote. It would take us back to the days of poll taxes."

The report also cited the "Mississippi Catch-22," calling it "particularly perverse." In response to the Brennan Center report, Mississippi Secretary of State Hosemann reacted vehemently, saying the "report"— he never failed to put the word "report" in belittling quotation marks—is "purposely inaccurate and is misleading."

In his statement, Hosemann accused the center of exaggerating the populations affected by distance to voter-ID-issuing sites and called its conclusions "fraudulent." The secretary then added this regarding the "Mississippi catch-22":

"What they do not say is each Circuit Clerk will be able to access the National Association for Public Health Statistics to verify available birth certificate data across the country at no cost to the applicant by simply obtaining basic information from the applicant."

Atwood said that Hosemann's statement was the first time she had heard of circuit clerks being able to access NAPHS birth certificate data, but maintained that this measure would not resolve all the barriers. "There may not be a birth certificate in some database somewhere. It may not exist," she said. The birth of older rural Mississippians, Atwood maintains, may never have been officially recorded.

"We don't know how many people are not going to be able to connect the dots from their birth certificate to their current name," she added, referring to people who need a marriage certificate or other proof of a name change in addition to a birth certificate.

For its part, the Brennan Center stood by its data—compiled primarily through recent U.S. Census numbers—and its conclusions.

"We sincerely hope that the state of Mississippi lives up to the Secretary's promise that these county offices will provide free photo IDs to all citizens who need them from 8 a.m. to 5 p.m., five days a week," the center stated in a response to Hosemann's accusations.

"We are glad to hear that Mississippi appears to have found a solution to this problem," the response continued. "Whatever one's position on new voter ID laws, we can all agree that in states where such laws exist, every effort should be made to ensure that eligible voters can get such IDs."

Trouble at the Polls

In August, Rutgers Law School, Common Cause and Verified Voting Foundation, issued "Counting Votes 2012: A State by State look at Voting Technology Preparedness." That report found that Mississippi is one of many states that could disenfranchise voters due to faulty voting-machine contingency plans.

"It's Murphy's Law—even in elections something can and will go wrong," Pamela Smith, president of Verified Voting, told reporters during a conference call.

The report looked at five areas: if a state requires paper ballots or paper records of every vote cast; if a state has adequate contingency plans at each polling place in the event of machine failure; if a state protected military and overseas voters and their ballots from alteration, manipulation and privacy violations; whether the state carried out post-election audits to verify electronic results; and if the state used robust ballot reconciliation and tabulation practices to ensure no ballots are lost or added.

Overall, the report ranked Mississippi "inadequate" based on its performance in each area. South Carolina, Kansas, Colorado, Louisiana and Delaware also ranked near the bottom.

In Mississippi law, if a voting machine becomes "injured," it is the poll manager's responsibility to notify the registrar so the machine can be replaced. The authors examined two Mississippi counties, and both confirmed that they have backup machines and emergency ballots on standby. However, the plan is not foolproof: Emergency paper ballots were not located in all precincts in the two counties studied.

The report's author received a statement from the Hosemann's office that stated, "Mississippi does not require emergency paper ballots to be kept at the polling place" but "as a practical matter ... it is usual and customary for paper ballots, in as near as possible in the form of the official ballot, to be kept at the polling place so as to not encounter any delay in the voting process and resulting disenfranchisement of any registered, eligible voter."

As stated in the 2010 "Mississippi Poll Managers Guide," the report found that voters could not use emergency ballots just because of long lines. Emergency ballots are provided in case one of the machines breaks, not for voter "convenience."

The state also ranked inadequate in its handling of overseas and military votes. Hosemann took issue with that finding as well. "Our process is very secure," Hosemann told the Associated Press, adding that Mississippi is one of 15 states recognized for making ballots available electronically. The Rutgers report states this could pose a problem because voting ballots received by fax or email do not require a signature.

Mississippi ranked "generally good" in the areas of ballot accounting and reconciliation. Most counties in the state use direct-recording electronic voting machines (DRE). At the end of the voting day, the poll-station manager must reconcile the tapes' numbers against the public count number. The poll manager must sign off on a "ballot recap form" that lists all of the valid and invalid ballots, and all unused ballots and affidavits. This procedure allows managers to determine if they are counting all votes but does not determine an accurate count.

On Aug. 24, the NAACP's Johnson re-affirmed his earlier statement that Mississippians need not worry about voter ID for the November election, based on the DOJ's review of the law.

Despite Secretary Hosemann's adamant defense that Mississippi is ready to implement the new law, he has also reportedly stated that he doubts anything will be set by Election Day on Nov. 6.

That does not mean that Mississippians should not remain vigilant and on top of the situation. Atwood called it was "unacceptable" to keep people from exercising their constitutional right to vote.

"I would want to ask the secretary, 'What's the acceptable number of people to disenfranchise?'" Atwood said. "I think it's zero."