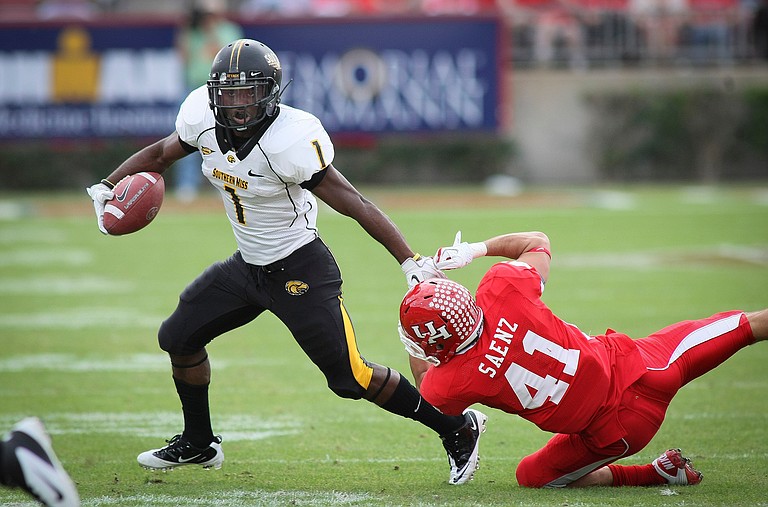 After the 2012 season ends, the Mississippi Sports Hall of Fame will award the Conerly Trophy to one player from a four-year university or college as the best college football player in Mississippi. Last year's winner Southern Miss quarterback Austin Davis graduated, so there won't be a repeat winner.

As stated in another article ("Where Have the Quarterbacks Gone?"), most of the colleges and universities will start a different quarterback from their first games of last season. That opens the door a little wider for a defensive player to win the award.

It is tough for defensive players to show their true value since most do not accumulate gaudy offensive numbers. Most defensive players need to make several game changing plays over the course of a season to stay in voters' minds.

The preseason favorites for the Conerly trophy:

Banks is the early leader for the award and took the most press this preseason. The cornerback has made nearly every preseason watch list and All-American team.

Last season, Banks had 71 tackles, eight for a loss and five interceptions. The senior from Maben first made headlines in his freshman season intercepting Tim Tebow twice.

Banks will have to compete with a teammate, senior Corey Broomfield, who is the cornerback opposite of him. Broomfield doesn't get the same publicity that Banks gets but is a solid football player.

If there is an offensive leader for the Conerly Trophy, it has to be Russell, a junior, who is entering his first season as the full-time starter. Russell will have one of the best receiving groups in the state.

Throwing to players like Chad Bumphis, Chris Smith and Arceto Clark could help Russell accumulate some good stats. Last season, Russell completed 69 passes on 129 attempts for 1,034 yards with eight touchdowns and four interceptions. Mississippi State's hopes of three straight bowls rest with Russell. A big season with great stats and a big upset could seal up the trophy.

Lampley might be the best receiver in the state, but this season he will have to work to show it since he will have neither Larry Fedora's high-powered offense nor Austin Davis throwing to him. Last season, Lampley caught 47 passes for 574 yards with four touchdowns.

The senior wide receiver from Waynesboro, Miss., is also a threat in the running game. Lampley ran the ball 91 times for 463 yards with three touchdowns. He is dangerous in the return game, producing 52 punt returns for 356 yards and one touchdown and 19 kickoff returns for 405 yards.

As a hybrid defensive end/linebacker, senior Collins could continue the line of star defensive players at Southern Miss. He will have to show that he can still be productive without Cordarro Law lining up opposite of him. Last season, Collins had 98 tackles and 6.5 sacks as part of a relentless attacking defense run by the Golden Eagles last year. Collins will get most of the headlines if he can produce big plays and wreak havoc on opposing offenses.

Moore, a junior, was a standout at Louisville High School and accepted an offer from Ole Miss before a run-in with his coach made the Rebels pull his scholarship. That left Moore to walk on at Ole Miss before leaving to attend Mississippi Gulf Coast Community College for the 2010 season.

He transferred to the University of Akron for the 2011 season, during which he completed 147 pass in 309 attempts with nine touchdowns and nine interceptions. After Akron finished last season 1-11 he transferred to Jackson State.

If Moore can win the starting job for the Tigers and lead JSU to SWAC championship, he has to be in the mix for the Conerly Trophy. If not this year, Moore will have one more year of eligibility left.

LeBeau has stats from last season that most defensive players can only dream of. He had 16 sacks and 24.5 tackles for loss as well as 75 tackles.

The senior defensive end was named pre-season SWAC defensive player of the year at the Southwest Athletic Conference media days. LeBeau will be in the Conerly mix this season as long as he keeps harassing and terrorizing opposing offenses.

A standout season with crazy defensive stats could make LeBeau the first Jackson State player to win the Conerly.

Ole Miss needs offensive play-makers if they are going to just be competitive this season. One player who could be a game changer is running back Jeff Scott. Scott ran for 529 yards on 116 carries with six touchdowns, and he was useful in the passing and return game. The school suspended running back for the last two games of the year for violating team rules.

Ole Miss has won the most Conerly Trophies with five, and Scott is their best chance for the sixth.