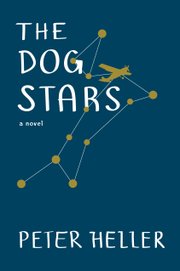 Author of numerous non-fiction books, award-winning author Peter Heller's first foray into fiction gives readers an unusual look at one possible future. "The Dog Stars" (Knopf, 2012, $24.95) is set in a post-apocalyptic world. Protagonist Hig and his old dog, Jasper, are survivors of a flu epidemic that has killed most of his fellow humans, including Hig's wife, and left many survivors with a wasting blood disease. Global warming and exploitation have made many animals and plants extinct. Civilization is a thing of the past.

In this not-so-distant future, Hig pilots a 1956 Cessna, nicknamed "the Beast," with Jasper as his co-pilot. Together, they patrol the ravaged (but recovering) Colorado landscape for other survivors. Not because he's lonely, mind you: Back at the airport is gun-toting curmudgeon Bangley, and the two men know that intruders in their carefully guarded world will probably take what little is left and will kill to get it.

Hig's own battle with the deadly flu has fried his brain, he's convinced, yet he can't simply forget his past life and go savage. He still takes pleasure in occasionally roaming the hills, hunting and fishing—but not for trout anymore; they're gone. Killing comes hard to Hig, unlike Bangley, who's a shoot-first type of guy.

Heller wrote "The Dog Stars" in an almost stream-of-consciousness manner, not a quotation mark to be found in the dialogue and lots of sentence fragments. Hig sees animals in the stars, beauty in trees and love in his memories—and so will you. The story is at times brutal but the language is often poetic. This is a deeply felt story about things we all crave: connection, love and survival in an unforgiving world.