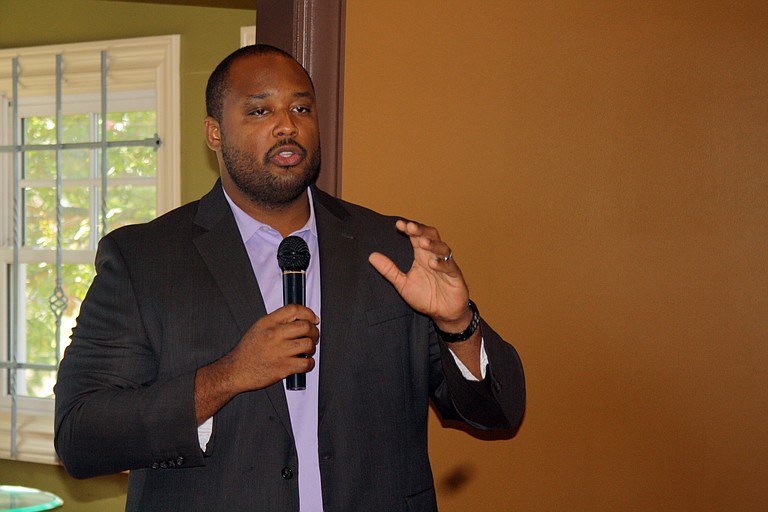 Corey Wiggins, project manager for MHAP, talked to citizens at Koinonia Coffee House Friday about the aspects of the Affordable Care Act that will soon take effect. Photo by Jacob Fuller.

JACKSON — With a few aspects of the 2010 Affordable Care Act taking effect Oct. 1, the Mississippi Health Advocacy Program is working to make sure citizens have access to the best medical care possible.

Through its program--Mississippi Road to Reform--MHAP is spreading word of the ACA and making sure Mississippians know what options are available to them in health care, Medicaid and health insurance.

MHAP Project Manager Corey Wiggins spoke to citizens at the Koinonia Coffee House Friday Forum this morning about what changes ACA has made, and will soon make, to the health-care industry in Mississippi.

Wiggins said MHAP is pushing for the state to expand Medicaid. If Mississippi expands Medicaid and implements a health-insurance exchange, which is required under ACA, Wiggins said 500,000 more Mississippians will have health insurance. ACA originally required states to expand Medicaid, but the Supreme Court struck down that aspect of the act. Wiggins said that Medicaid expansion and the exchange can help the state solve its current problem of a lack of doctors.

Under ACA, Medicaid will be available to anyone under age 65 and with an income not exceeding 133 percent of the federal poverty level. In 2012, that income is, at most, $14,856 annually for an individual or $30,656 for a family of four.

Individuals and families that make between 134 and 400 percent of the federal poverty level will be eligible to purchase insurance from the exchange, a marketplace of insurance providers that allows customers to find the best-priced coverage. MHAP estimates that 275,000 Mississippians will be eligible to purchase from the state's exchange, with 229,000 of them eligible for tax credits and subsidies the federal government will offer to exchange customers.

MHAP has polled citizens across the state. Wiggins said the results show that almost everyone agrees that health insurance in the state needs to change. He said he has also discovered that most of those who do not agree have never spent time talking to people who do not have health insurance.

The subject of health insurance can bring people from all walks of life together, though.

"If you are a successful business owner (and) you have employees, this impacts your bottom line," Wiggins said. "If you are that middle management, you're concerned about your family and the impact of health care and those premiums you're paying. If you're an on-the-line worker, you care about health insurance. If you're uninsured, you definitely care about it."

Hospitals currently receive money from their insurance companies for those who do not have insurance, known as uncompensated care. Wiggins said that money is going away with the implementation of ACA.

That's why hospitals are becoming more vocal in telling the state to expand Medicaid, because it will help make up for the loss of income from uncompensated care.

One law that will take effect Oct. 1 is a value-based purchasing program for hospitals in Medicare. Under the law, hospitals are required to publicly report performance, starting with its measures to treat heart attacks, heart failure, pneumonia, surgical care, infection-related care and patients' perception of their care.

Another aspect of ACA that will take effect in October is one that requires medical providers to begin creating and implementing electronic health records. According to the White House website, this will reduce paperwork and administrative burdens, cutting the cost of providing medical care.

Wiggins, who has a Ph.D. in health promotion from the University of Alabama-Birmingham, said he worked as a Health Policy Fellow in the U.S. Senate from 2004 to 2005. During that time, he said, most of the aspects implemented in ACA were Republican-backed initiatives. That just shows how politics can change viewpoints, Wiggins said.