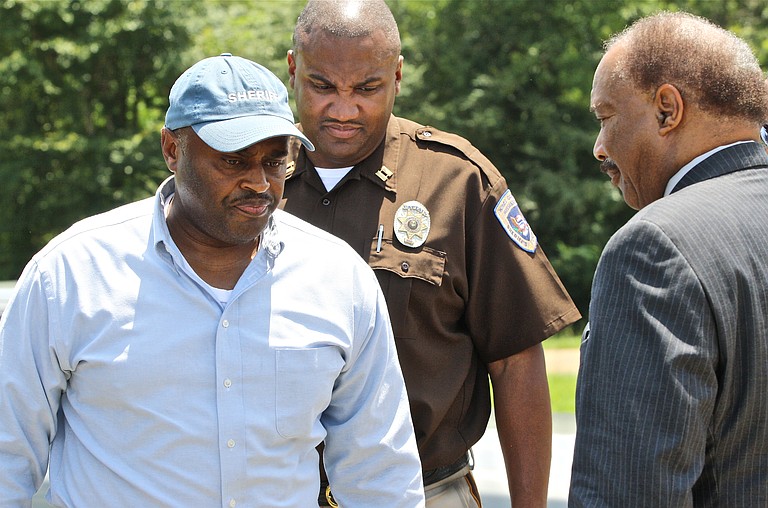 RAYMOND--After a disturbance at the Hinds County Correctional Facility, law enforcement officers took more than 12 hours to take back and fully secure the facility.

Inmates created a disturbance in Pod C at HCCF around 2:30 a.m. Monday. One inmate, Kendall Johnson, started the disturbance by flooding the Pod and holding off guards with a fire hose, and then letting other inmates out of their cells, Hinds County Sheriff Tyrone Lewis said. In all, 183 inmates populated the pod, and they quickly flooded the jail and took over at least one housing unit.

The county sheriff's department, with the help of several other law-enforcement agencies, secured most of the Hinds County Correctional Facility by mid-day Monday. Around 2 p.m., Lewis told the media that officers had entered the jail at 12:27 p.m. and had secured two of the four units in Pod C. Inmates offered no resistance in either housing unit, Lewis said. Each Pod is made up of four housing units.

"We have what we call several different S.W.A.T. teams in place. They have tactical experience, and they were able to use their tactical experience and training to get in without harming themselves or harming anyone else," Lewis said.

Because of the flooding and other possible damage to the prison, Pod C is now inoperable, Hinds County Chief Joseph Daughtry said Tuesday. Inmates from Pod C have been moved to Madison and Rankin County holding facilities. All other pods are fully operational, Daughtry said.

Daughtry said the Sheriff's Department does not know how long it will take to repair the damage to the pod, or how much it will cost.

The sheriff said there have been no injuries. One detention officer was taken to the hospital for precautionary measures, but Lewis said she did not sustain any injuries.

Though officers were in the building, the disturbance was not over by 2 p.m., Lewis said. Officers were continuing to clear the pod, one housing unit at a time.

The family of inmate Johnson was outside the facility Monday morning. His mother, Delores Walker, said Johnson told her that jailers at the facility beat him Sunday.

Walker said no one from the Sheriff's Department has spoken to her or any of the family members of inmates since the disturbance began.

"We need to know the names of the officers who beat my son," Walker said.

Walker said Johnson was in the facility on charges of possession of marijuana, a violation of probation for a previous offense. He has not been to court on the marijuana charge.

Community activist and organizer of Citizens Against Racial Profiling David Archie spoke for Johnson's family at the scene. He said Johnson refused to surrender to anyone but Hinds County Supervisor Kenneth Stokes or Gov. Phil Bryant.

Stokes arrived on the scene around 12:45 p.m., and Hinds County deputies let him past the checkpoint at the corner of County Farm Road and Highway 18.

Archie said he offered to put on a bulletproof vest and enter the prison to negotiate for Sheriff Lewis. He said Johnson did not want to talk to anyone with a gun and a badge.

"No one who has a badge or gun should be beating anybody up," Archie said of Johnson's claims of abuse. He also said it was wrong that no one had talked to the families of the inmates who had been sitting in the heat outside the jail all day. "They don't care what the family thinks. They only care about the power they possess," he said.

Lewis said there were enough guards in the Pod, and that he did not know of any guards beating prisoners or of any sub-par conditions in the complex. He said he wants to undertake a fair investigation into the causes of the disturbance.

The disturbance is the latest in a string of uprisings at prisons and correctional facilities across the state in recent months.

maybe Kenny Stokes could focus on conditions at the jail instead of worrying about writing tickets for saggy pants kids. Nah that sounds like real work would want to ask him to do that now would we.

The sheriff is supposed to be the highest law officer of the county, not kenny stokes. If water is the problem and the doors lock(if the doors work) then put them in and lock the doors. To hell with the public. if Tyrone had the (bleeps) he would try to follow the high sheriff of Arapaho County. Lock them up first and worry about their feelings later.

And Kenny should focus on the saggy pants and not the jail. The jail belongs to Tyrone and Tyrone needs to knuttup, as they say in Louisiana.