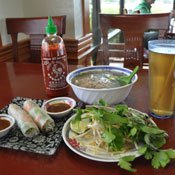 Two years ago while I was visiting Gulfport, a friend introduced me to a Vietnamese noodle dish I fell hopelessly in love with. Fresh herbs, spicy sriracha sauce, rice noodles and a hearty beef broth gathered together in one bowl to form a love fest of flavors whose sole purpose was to party down on my taste buds and take them for a trip on spicy magic carpet ride. Fresh limes squeezed into the dish topped off the seasoning soiree satisfyingly. This complex culinary wonder went by a deceptively simple name: pho. It is a combination of noodles and meats or seafood in a rich, hot broth. It can be made with steak, meatballs, chicken, or shrimp, or made without meat.

I was delighted to discover Jackson has a Vietnamese restaurant serving up this ambrosia seven days a week. I've been going to Saigon Vietnamese Restaurant (2640 Lakeland Drive, 601-420-4848) since 2010 whenever the craving for something fresh, spicy and filling strikes me.

I actually remember when the location was once home to an Arby's. I have to marvel at the transformation. Dark wood tables and chairs have replaced the plastic booths. Live greenery is scattered throughout the restaurant. It's simply and tastefully decorated.

The pho Saigon serves up takes five hours to cook, said owner Phong Pham, an Oregon native. This is a soup that requires time in order to fully develop the flavor. When I ask for the secret to a good pho, Pham answers simply, "Cinnamon, ginger and honey." With all the other flavors going on in this noodle dish, I've never picked up on those ingredients.

I adore the combination of crunchy sprouts, fresh herbs and slow cooked warmth. To spice it up, a squeeze bottle of sriracha sauce (hot chili sauce) sits in a prominent place on the table. Squeeze carefully—this powerful sauce packs some heat. I always go a little overboard with the sriracha sauce. "It's good for the sinuses," Pham tells me with a grin. Amen!

I am particularly fond of Saigon's pho tai, which is pho with paper-thin cuts of eye-round steak, added rare into the hot broth. The broth's heat cooks it instantly. I've never been instructed on how to eat pho, but I use chopsticks and a spoon to eat it. I use the spoon to scoop up the broth and grab the steak, noodles, and sprouts with the chopsticks.

So how did the Vietnamese come up with this culinary wonder? I searched the Internet and found a blog dedicated to all things pho—lovingpho.com. Cuong Huynh, the owner of this impressive blog, furnishes an arsenal of information on pho and addresses everything from how to pronounce pho (complete with audio) to the history of the dish. His entry "The History of Pho: A Hundred Years' Journey" explains that pho's beginnings coincide with the French occupation of Hanoi in Northern Vietnam.

"Pho" is believed to be a mispronunciation of the French word "feu," meaning "fire." The French brought a beef-based soup called pot au feu, or "pot on fire" to Vietnam. The soup uses a beef broth simmered for hours over low heat as its base and is topped with root vegetables. Pho possibly originated as the Vietnamese version of pot au feu.

I am simply happy that this dish managed to migrate west to my particular spot on the globe. I haven't attempted to make this dish at home. I drive down the road to Saigon. The price is reasonable, and the pho is fresh. A large bowl is too enormous for me to eat in one sitting. If you haven't tried pho, I highly recommend broadening your taste buds' horizons.

Disclosure: The owner provided the writer with a fresh dish on her visit to interview him. She did not guarantee a positive review in exchange.

Make broth as directed. Simmer for 10 minutes. Once this is done, in a large pot bring four quarts of water to boil. Remove from heat and add the noodles. Soak noodles in the water for 15 minutes, stirring occasionally, until noodles are tender and easily separate. Drain noodles and divide them into serving bowls. Simmer seitan in broth until heated through, or approximately 4 minutes. Remove seitan with a slotted spoon and slice thinly into six portions. Add to noodles. Place bean sprouts, cabbage, greens, basil, cilantro, scallions, and peanuts (optional) on top of the noodles and seitan. Spoon hot broth onto noodle mixture. Serve with lime wedges, chili rounds, and salt and pepper for seasoning to taste. Serves six.