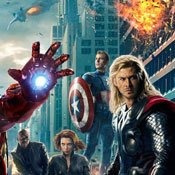 The summer blockbuster season officially kicks off May 4 with "The Avengers" and its big-star cast.

The concept of "big" stretches to "bigger" for the 2012 summer blockbusters, where budgets for comic-book fare exceed the $220-million mark. The payoff for these astronomical budgets takes the form of amusement park thrills, emphatic musical scores, big stars interacting with nothing but CG screens and an overall feeling of spectacle kicked up on steroids.

While human imagination and ingenuity know no bounds, the stories, sadly, do. Don't expect anything more than heroes and sheroes (the glass ceiling has been broken) whacking the bejeebies out of evildoers. And that's OK when you're chilling inside a movie theater with a lusty tub of popcorn at your side.

The official blockbuster season kicks off May 4 with "The Avengers." This slick, quarter-billion-dollar motion picture is all about—what else?—good versus evil. Nick Fury (Samuel L. Jackson), director of SHIELD, the international peacekeeping agency, pulls together a team to save the world from an enemy that threatens the globe. Fury recruits Iron Man (Robert Downey Jr.), Thor (Chris Hemsworth), The Black Widow (Scarlett Johansson), Hawkeye (Jeremy Renner), Captain America (Chris Evans) and The Hulk (Mark Ruffalo) to thwart the threat.

Pull out your black shades for "Men in Black III." The first two movies of this franchise brought in more than $1 billion worldwide, so it had to become a trilogy. In 1969, an alien criminal kills the young Agent K (Josh Brolin), which places Earth in extreme danger. To reverse history, veteran Agent J (Will Smith) travels back in time before the murder to save the young Agent K and humanity.

"Snow White and the Huntsman" begins with the familiar fairy-tale classic. Unable to tolerate any insult to her vanity, the Evil Queen (Charlize Theron) orders a huntsman (Chris Hemsworth) to take Snow White (Kristen Stewart) into the woods for one shot, one kill. Snow White is too gosh darn cute for that to happen, so the story twists into the huntsman training Snow White into a warrior capable of ending the queen's reign.

Ridley Scott directs "Prometheus," a visually luscious sci-fi jaunt, starring Noomi Rapace, Charlize Theron, Patrick Wilson and Idris Elba. A team of explorers discovers a clue to the origins of mankind on Earth, leading them on a journey to the darkest corners of the universe. There, they do battle to save the future of the human race.

One of the most sensational films of the summer season involves the 16th U.S. President in "Abraham Lincoln: Vampire Hunter." Tall Abe, who was always gaunt and pale, eliminates vampires who are planning to take over the world. He is deemed the greatest hunter of the undead, all the while commanding Union forces and taking on slavery.

If you need to vent, GI Joes are back in "G.I. Joe: Retaliation," the third film in the franchise. Testosterone pumps up when a Cobra spy assassinates most of the Joes. The remaining Joes band together and get their feisty back on. Guess what? They retaliate.

"The Amazing Spider-Man," directed by Marc Webb, gets into the details of Peter Parker's sad life. Played by Andrew Garfield, Parker tries to figure how he got to be the nerd that he has become and tries to get a handle on his high-school crush (Emma Stone). But destiny intervenes when a mysterious briefcase launches Parker on a quest to understand his parents' disappearance. This leads him directly to the lab of Dr. Curt Connors (Rhys Ifans), his father's former partner. You can figure out the rest. Parker's alter ego, Spider Man, fights with Connors' alter ego, The Lizard.

"Total Recall" is back. As the nation-states Euromerica and New Shanghai vie for supremacy, a factory worker (Colin Farrell) begins to suspect that he is a spy, although he doesn't know which side of the fight he's on. Confused much?

Batman returns in "The Dark Knight Rises," directed by Chris Nolan. Despite his tarnished reputation after the events of "The Dark Knight," in which Batman (Christian Bale) took the rap for Harvey Dent's crimes, Batman feels compelled to intervene to assist the city and its police force in the struggle to cope with the latest evildoer's plan to destroy the city. Anything by Nolan is worth seeing. He made hero action films into something more than a commodity.

This summer's line-up may make you want to construct a costume and engage in some serious super-hero-style vigilante justice. Or not. Kick back, relax and enjoy.