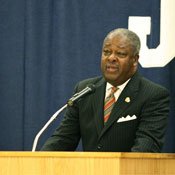 Mayor Harvey Johnson Jr. And the city of Jackson are planning the Fresh Start program to help convicts with re-entry into society.

While the Jackson Police Department's tools for reducing crime include more officers patrolling the streets, restructuring beats and adding new technology, the city of Jackson is in the planning stages of a more complex weapon for fighting crime.

In 2008, President Barack Obama signed The Second Chance Act, which allows the federal government to award grants to government bodies and nonprofit organizations to help people returning to the community from jail or prison find employment and housing, and provide them with skills training, mentoring and substance abuse treatment.

Jackson was one of 15 cities out of more than 600 applicants to receive the $55,000 grant to fund the planning of a program to reduce recidivism. The city has assembled a task force to create a plan for Jumpstart, a program that aims to help ex-convicts learn skills and get jobs in an attempt to keep them from committing more crimes and returning to prison. The task force has held one orientation meeting to introduce members to the goals of the program.

The city has until September to submit an official plan to the U.S. Department of Justice. Once the plan is completed, Jackson will apply for more grant money to implement the program.

"Having received the planning grant, it sort of gives us an upper hand, if you will, in competing for implementation funds," Mayor Harvey Johnson Jr. Said. "Whether the other 14 groups will go to the next step, I don't know."

The task force is made up of more than 50 city leaders, including Police Chief Rebecca Coleman, Sheriff Tyrone Lewis, Department of Corrections officials, judges, business leaders such as Socrates Garrett of Garrett Enterprises and Jeff Good of Bravo and Sal and Mookies, and Jackson-Hinds Comprehensive Health Center CEO Dr. Jasmine Chapman, as well as a few ex-convicts. Offender Reentry Program Coordinator Karen Quay would not release the names of the ex-offenders who attended the task-force meeting at press time.

Quay said the Department of Human and Cultural services, headed by Louis Armstrong, was keeping Fresh Start from getting "too public" until they had a better idea of what the plan for the program will be. She is currently working to schedule the task force's second meeting at Eagle Ridge Conference Center in Raymond.

Armstrong himself, a former Jackson council president, is an ex-felon who served 13 months in federal prison for accepting part of a $25,000 bribe in the late 1990s meant to help influence positive zoning for a strip club. He returned to city government in 2007 during the Frank Melton administration.

At the regular City Council meeting April 17, the Council approved a contract with Vivian Taylor, an education professor at Jackson State University, to serve as an adviser and internal evaluator of the planning stage of Fresh Start. Her role is to make sure the goals of the program are being met and to troubleshoot any problems that arise.

Taylor is the coordinator of a juvenile recidivism program at Henley-Young Youth Justice Center called Friday Night Live. She has also written for and advised grant seekers for 25 years.

"(Fresh Start) needs to address, primarily, pre-release and post-release after care for paroled and released offenders," Taylor said. "It needs to provide support services that will assist them with issues related to emotional and social development, as relates to employment, as relates to getting re-immersed into the community and even in their own families. It needs to address continuing education and career development, as well as on-going consistent, systematic monitoring and advisement."

The program also needs to sensitize employers to hiring ex-offenders, Taylor said. There is an understandable concern among employers to invest in people who have been incarcerated, but Taylor believes if they are given a chance at a legitimate job, they are less likely to repeat previous offenses.

"Currently, we are in a funded year for planning. My goal is to make sure we cover all the bases, that we make sure we have the right people at the table," Taylor said. "(We have) a huge diversity of community stake holders at the table, so that we will have a wide perspective of how to address the issue.

"In our last meeting with the officers from (the Department of Justice) last week, one of the things that they thought was critical, and of course we concurred because we had talked about it as well, is to make sure that the community is abreast and involved."

Taylor invited the Jackson Free Press to join the task force at future meetings. She said she also plans to hold several town meetings to keep the community involved in the planning of the Fresh Start.