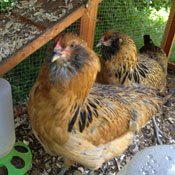 The author gave his fiancée a chicken coop for Christmas.

I started my first urban garden many years ago when I lived in Austin, Texas. I was attending the Texas Culinary Academy and had just started learning about the farm-to-table and local-food movement. Before Austin, I had always believed that the more miles food had traveled to wind up on my plate, the more special it had to be.

In Austin I was immersed in a community of chefs, restaurants, foodies and artisans that supported each other, relied on each other and helped to make the food scene around them better. I started visiting the local farms around me to pick up produce for one of the restaurants I was working at; my favorite one was just a few minutes away from downtown Austin in a residential area. They probably didn't have more than two acres, but they used every inch to grow as much as they could.

The best strawberry I've ever had in my life came from that farm: blood red, juicy and perfectly sweet. It wasn't picked early and sprayed with chemicals to speed up the "ripening process," and then shipped from 800 miles or more away. It was good because the growers treated the soil with respect, and the loving farmers picked the berry when it was perfect, just two or three hours before I tasted it.

At some point I said to myself, "Why can't I do that?" Unfortunately, I didn't have two acres, or one, or even a yard. I had a very small apartment patio that got good morning sun, and then shade the rest of the time. So I purchased some pots, soil, a few plants, and some seeds and went after it. I did a small amount of research on container gardening, and before I knew it, I had pots of plants, baskets of flowers, and tons of herbs, peppers and even a tiny loquat tree. I had no idea what I was doing, but it was fun to see the things I was growing flourish.

I had to give my little garden paradise up when I moved from Austin back to Dallas, but I always wanted to pick it back up and take it to the next level. When fellow chef Ryan Bell and I moved to Jackson, we talked about building a small raised bed in the gravel parking lot behind our apartment. I made some good friends who were growing tomatoes and squash in raised beds in Belhaven, and during my daily runs through the neighborhood, discovered many more.

Soon I met Rachel Horn, a beautiful girl living in Fondren, and before we knew it, we were engaged. I moved into her small Fondren house and when spring came around, started giving the backyard some love. From my visits to the Mississippi Farmers Market on High Street, I began to see what kinds of plants and vegetables did well here and what grew natively.

My first purchases were four blueberry plants, two small fig trees and two muscadine vines. These crops are abundant in Mississippi, and when in season, we focus dishes at Parlor Market around these ingredients. Several of the vendors at the farmers market will sell great plants for your urban farm. You can find all the varieties I've mentioned already, plus plum trees, tomato plants, squash, herbs and more, ready to transplant into your garden!

Next came herbs of all types: thyme, oregano, basil, dill, cilantro, rosemary, lavender and mint. The more you use them in your cooking, the more fun it is to watch them grow, bolt, flower and turn into seed, which you can then use as spices in your food! The cilantro will very quickly turn into coriander seed. You can even use the fragrant yellow pollen from fennel and dill to garnish your dishes.

I heard rumors of pomegranates growing well in Mississippi, and when I found a plant, I was happy to take it home. There are beautiful flowers growing on it right now, which will soon turn into fruit.

After a year of casual container gardening, Rachel and I decided to take things to the next level. We had talked about raising chickens for eggs, and as a Christmas present, I ordered her a complete chicken coop online from mypetchicken.com. Byron Knight (barista extraordinaire of Sneaky Beans) and I put it together in just an hour, with few setbacks. Soon after, Rachel and I sourced some week-old chicks locally and raised them inside under a heat lamp for a few weeks until they were ready to move to their new home outside in the coop.

We got two araucanas, known as Easter egg chickens due to the blue, green and pink eggs they lay, and two silkies. The silkies are smaller, lay little eggs and have fur-like feathers. Rachel thinks they're cute. I think they're silly.

I figured once we had the chicken coop in place, we might as well go all the way, and my friend and local farmer, Jonathan Picarsic of Amorphous Gardens, came over and helped me build a giant tiered raised bed out of old lumber we had lying around.

It was an easy build: We picked an area of the yard that gets full sun, measured, dug post holes, inserted the posts at least 8 inches into the ground, attached boards along the sides and filled the bed with soil. The soil we chose is a mixture of top soil and organic humus. It may sound cheap at around $1.30 per cubic foot, but it adds up quick. I think we purchased about 80 bags for our two large beds.

Jonathan has taught me things all along the way and provided me with some great heirloom seeds and a few plants for the garden.

Right now I have rows of beets, carrots, radishes, squash, zucchini, purple tomatillos, peppers, and several varieties of tomatoes planted in the large bed. The smaller bed has all my herbs, as well as a small strawberry patch and green onions. The key to planting is to start your seeds early indoors and then transplant the seedlings outside when the weather is right.

To make sure I always have rich soil, I started composting. I bring all the vegetable scraps, eggshells, coffee grinds and more home from the restaurant every day and add it to my compost bin. Every few days I turn the heap and watch as the vegetables turn into rich organic material. Dead plants and leaves also make their way to the compost bin (which doesn't stink at all, by the way).

Next came the beehive.

When I mention to my friends that I have a beehive, I always get raised eyebrows! Frank Garletts of Mississippi Bees, who provides Parlor Market with all our local honey, gave me my honey bees. The bees fly everywhere and pollinate all the plants in the garden and don't bother anyone. When it's sunny and warm, they are everywhere! If the weather is cool or cloudy, they like to stay in the hive.

My resident bees are doing so well that Frank recently came by and added a second story to their hive so that they could expand and produce even more honey. I will soon be getting a honeybee tattoo on my arm to go with my giant beet tattoo!

Urban farming has been incredibly rewarding in many ways: It's an exciting hobby, can supplement your family's groceries with healthy, fresh and delicious produce, does wonders for the environment, and promotes a social community. It has allowed me to get closer to what I do every day and to understand where our food comes from and the love that goes into growing a single perfectly vine-ripened tomato.

Now get out there and make the most of your yard!

JFP food columnist Jesse Houston is the chef de cuisine of Parlor Market. His column will appear at least monthly.