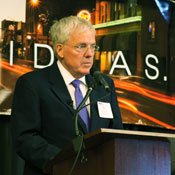 What essentially became a pep rally for Mississippi's economic future last Thursday began with a parade.

"If you want to be a leader, just find a parade and jump in front of it," quipped Jim Barksdale last week to a gathering of business professionals and civic leaders in Jackson. Barksdale is interim executive director of the Mississippi Development Authority.

The "parades" Barksdale named are health care and energy, two industries for which Gov. Phil Bryant has been cheerleading. The governor said he believes they are the two best bets to attract new capital investment to grow Mississippi's economy in a hurry.

"Health care is an industry of necessity," Bryant told the crowd, rattling off figures about the nation's aging population and numbers on health-care revenues. The same could be said about the state's energy economy. Bryant--and Barksdale--again parroted the findings of the Fraser Institute, a Canadian public-policy think tank, which last year called Mississippi the world's most attractive place for oil and gas investment.

In addition to pushing through energy and health care legislation key to Bryant's jobs program legislators recently voted to allow the permanent MDA director's salary to be substantially higher than the governor's. Currently, state law permits the MDA to earn 150 percent of the governor's $122,160 salary, or $183,240. Under the bill, private donations could supplement the salary further.

Supporters of the move argued that the state lost several candidates for the MDA gig to other southeastern states who could afford to pay a lot more. The pay scheme's supporters include Barksdale--whose yearly compensation totals $1 as did that of his predecessor, Leland Speed--and Republican lawmakers.

"It'll work out fine; just trust me," Barksdale told an MEC audience in response to the concerns, mostly from legislative Democrats.

Not sure about how well the arrangement would work, Democrats argued instead for raising the MDA director's salary to be more competitive instead of adopting the private donations provision, which they asserted could open the door to cronyism and corruption and pit richer areas of the state that can afford to put more into the salary pool against poor regions.

"When you see a snake slithering through the legislative chamber, the best thing to do is shoot that mother," said Rep. Steve Holland, D-Plantersville, during the spirited floor debate. "There are snakes in this bill."

Once a permanent MDA director is in place--which Barksdale predicts should be in a few weeks, according to Mississippi's top legislative leaders--the rest of future of Mississippi's economy looks bright.

That is, as soon as we set up charter schools, eliminate abortion, get rid of the undocumented immigrants and take away Attorney General Jim Hood's power to hear the Republicans who addressed MEC tell it.

House Speaker Philip Gunn, the first Republican to hold the chair since Reconstruction, and Lt. Gov. Tate Reeves also gave assessments of the state's economy from their vantages in the House and Senate, respectively.

When Gunn rose to speak about the Legislature's accomplishments, the first item he addressed was the passage of the so-called Sunshine Act, which he said made the state more business friendly by adding transparency to the process the attorney general's office uses to subcontract work to outside lawyers.

Gunn did not, however, mention in his speech that the bill, which passed both houses, gives state agency heads discretion to hire outside firms whenever they feel like it.

Despite arguments from Hood that the move could cost the state millions in additional legal fees, the Republican leadership, which has been trying to rein in Hood's power for years, rammed the bill through the Legislature.
Hood is the only Democrat in statewide office, and the state attorney general's office typically handles all the state's legal matters.

More relevant to business, Gunn also touted dismantling the state's inventory tax and changing the workers' compensation system, which he said removes an unfair advantage workers had over the people who sign their paychecks.

Reeves, who presides over the state Senate, focused his remarks on education, particularly consolidating school districts in Sunflower and Bolivar counties and on the effort to bring charter schools to Mississippi.

"We're committed to investing in the current public-education system," as well, Reeves said. He noted that in the Senate's version of the budget, $30 million more was allocated to education over last year, the first time for any year-over-year increase in five years.

The lieutenant governor also vowed to "right-size" state government, referring to early attempts to strip state workers of personnel-board protections for two years, which would allow department heads to fire workers at will. Because the House amended the Senate's version to reinstate workers' due-process rights, Reeves said he would continue to work at it through the appropriations process.

Barksdale, who recently gave $100 million for literacy programs in Mississippi, ended with a warning.

"We have to improve our K-12 education system in this state, or we will always be in trouble," Barksdale said.