Earth Day and the Organic Movement 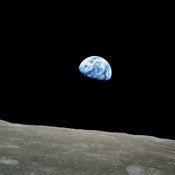 Forty-two years ago, a new way of looking at our Earth arose in human consciousness.

It came about on Christmas Eve in 1968 when Astronaut William Anders looked out the window of Apollo 8 and snapped a photo that he dubbed "Earthrise."

The photo was featured on the cover of the first "Whole Earth Catalog," which celebrated natural living and a back-to-the-earth credo in 1970. It became the icon of a movement that saw the first Earth Day that same year.

That holistic way of looking at the world—seeing us all as voyagers on a tiny, bobbing blue and green vessel in the vastness of space—gave vigor to another movement that came to be called organics.

On Earth Day this year, it's time to review where that movement went, where it is likely go and maybe even where it should go.

For those deeply involved in the organics movement, this year could prove transformative. Some of its pioneers believe that industrial agriculture has co-opted the movement since the U.S. Department of Agriculture took over administration of organics, and that the movement has lost its spirit. The USDA has even made it illegal for a farm to use the word unless it us USDA certified.

Most of the USDA Certified Organic produce you see in your local grocery store is grown on huge factory farms using migrant laborers who are often abused and exploited, paid pennies on the dollar, housed in shanties and, because they are often undocumented, are afraid to complain for fear of being deported. That's if the produce is grown in the United States.

Much of the produce marked USDA Certified Organic in your market is imported from foreign countries where inspections to ensure harmful synthetic chemicals, fertilizers and poisons aren't used or may be lax. Corporate ownership of organic brands is becoming the norm. (For a list of corporations that own certified organic farms and their brands, see http://www.bit.ly/i6zF44.)

Beyond the Label
Eliot Coleman, author of "The Winter Harvest Handbook" (Chelsea Green Publishing, 2009, $29.95) among other titles, grower, and owner of Four Season Farm in Maine (fourseasonfarm.com), was a founder of the organics movement in the 1960s and helped set up the original National Organic Program guidelines. Now, however, he rejects USDA certification.

Indian Line Farm in Egremont, Mass., one of the first Community Supported Agriculture farms in the U.S. and a founder of the CSA movement, also rejects USDA certification, choosing instead to be listed with Certified Naturally Grown, a nonprofit alternative eco-labeling program for small farms that grow using USDA organic methods but are not part of the USDA program. (Disclosure: My ShooFly Farm in Lena is CNG certified.)

The organics movement faces a dilemma, even from within: whether to embrace "evil" Big Ag and all it entails, including greater corporatism and devaluing of workers, or to reject the mainstreaming of organics and its promise of a better planet.

This schism is playing out around the world. Countries in Europe and elsewhere have rejected genetically modified, or GMO, seeds and food because they believe these mutated strains are untested for human health and safety and could pose a threat to the environment. However, under a quirk of U.S. law, GMO doesn't have to meet independent testing and analysis to be proven safe. The foods are safe because companies that genetically engineer them say they are safe, and they fund their own studies to prove it. Hence, companies can market GMO food and seed to an unsuspecting public even without labeling.

A real risk exists that, ultimately, the food and farming label of "USDA Organic" will be a distinction without a difference.

Organics' Gordian Knot
This growing divide forces a dilemma for the consumer as well. Certainly, Certified Organic is better than conventional chemical farming. It's healthier, safer and more beneficial for the planet. But it's a Faustian bargain: In exchange for safe, healthy, pesticide-free food under the guise of saving the planet with environmentally friendly farming methods, consumers may be dooming the planet to worse air pollution, depletion of natural resources and exploitation of workers, while putting land ownership and food production into fewer hands.

Like the fabled Gordian knot that many said was impossible to unravel, the answer for consumers is almost embarrassingly simple: Grow local, buy local. In other words, cut through USDA and Big Ag-generated confusion.

Here is the key to the future of organics if it is to continue in the spirit in which it began: The organic movement must transition from an idea of sustainability using old growing methods to a new model that embraces modern social change and science. In centuries past, growers who used organic methods knew the practice worked, but they didn't know why. Now, with all the research into soil science that is broadening horizons as to the vital role of fungi and microorganisms in the soil, we know and can scientifically prove that organic methods can feed the world for a safer, sustainable and nourished planet.

Consumers want safe food, and young people have embraced the idea. Many have started small backyard and "boutique" farms to grow foods. This small but growing postmodern organics movement embraces a worldwide awareness under the moniker "ecoagriculture." I believe this is the next phase of organic growing

The Power of Choice
In America, I suspect this movement will likely veer increasingly away from pure crop production and toward a more holistic view of the environment, such as permaculture.

Coined in 1959 by two Australians, Bill Mollison and David Holmgren, permaculture incorporates two concepts: "Permanent Culture" and "Permanent Agriculture." The practice eschews soil disruption, an agricultural hallmark since its beginning 10,000 years ago. To the untrained eye, a permaculture food plot may appear to be a jungle. However, if it is well crafted, it can serve as a continuing ecosystem through the seasons, providing food with a minimum of human intervention.

The future of organics is in our hands. We each can do our part in keeping our precious Earth of Anders' iconic photo blue, green and clean by growing our own food—whether in our backyards or with our neighbors in community gardens—and by buying organic, rejecting GMO, supporting locally grown food and only voting for those who look out for the consumer first.

This is the type of organic growing that those of us who marveled at that little planet in the black void of space envisioned some 42 years ago.