Hinds Co. to Jackson: Get Your Own Jail 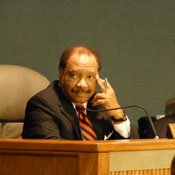 Hinds County wants the city of Jackson to have its own detention center to house misdemeanor offenders.

At this morning's Board of Supervisors meeting, District 5 Supervisor Kenneth Stokes complained about the cost of housing and feeding nonviolent misdemeanor offenders at the Hinds County Detention Facility, many of whom are Jackson residents.

Stokes, noting that the city's budget is eight times larger than the county's, proposed meeting with Jackson city officials to renegotiate how much the city pays the county to house residents in the county jail.

Board President and District 1 Supervisor Robert Graham told Stokes that he would get his wish to have a meeting with Mayor Harvey Johnson Jr. to discuss the issue.

"It's breaking the county in a lot of respects," Graham said. District 4 Supervisor Phil Fisher, who keeps tabs of the daily inmate population on his website, said he would also support the cost-saving measure. On Sunday April 16, according to Fisher's site, the county had an inmate population of 1,023. Of that number, 725, or about 71 percent, came from the city of the Jackson.

Carlton Brown, chief operating officer of Full Spectrum Inc., developers of the project, told the Jackson Free Press the planned parking garage will take six to nine months to build; after Full Spectrum breaks ground this summer, the company expects the entire project to take about 24 months to finish.

Blake Wallace, executive director of the Hinds County Economic Development Authority, told supervisors this morning the developer's "timeline is going to be tough to meet" because his agency still needs to analyze Full Spectrum's financials and other documents. After that analysis is complete, the development authority may have additional questions, Wallace said.

In August 2010, supervisors approved a tentative agreement with the city of Jackson and New York City-based developers Full Spectrum Inc. establishing financial support for infrastructure related to the proposed Old Capitol Green development in downtown Jackson. Under the agreement, the county would provide Full Spectrum $20 million, using a loan from the Mississippi Development Authority, while the city would install water and sewer infrastructure to support the proposed mixed-use development.

Malcolm Shepherd, Full Spectrum's development director, said his firm is waiting on the MDA to draft a loan agreement and for tenants to sign leasing agreements.

Attorneys and private citizens would be able to search the database and make copies for 20 cents per page (the current rate is 25 cents a page; PACER charges 8 cents per page), Chancery Clerk Eddie Jean Carr told the JFP.

The county will allocate money for the scanners from $178,086 in savings that Carr's office recently returned to the county, she said.